A spokeswoman for Assemblyman Hakeem Jeffries, who is running against Charles Barron in the congressional race in Brooklyn’s 8th District, had harsh words for a video made by KKK Grand Wizard David Duke endorsing Mr. Barron.

“Hate and extreme rhetoric have no place in our society,” Lupe Todd, Mr. Jeffries’ campaign spokeswoman said. “We denounce David Duke’s remarks in its entirety and urge the other candidate in this race to do the same.”

In his video, Mr. Duke acknowledged he has disagreements with Mr. Barron, a former Black Panther, but in spite of those differences, he said he supports Mr. Barron for his criticism of Israel and accused Mr. Jeffries of having “sold his soul to the international Zio-bankers.”

“In a race for Congress between an anti-Zionist black activist and a black activist who is a bought and paid for Zionist Uncle Tom, I’ll take the anti-Zionist any day,” Mr. Duke said. “In this election of limited choices, I believe that Charles Barron is the best choice.” 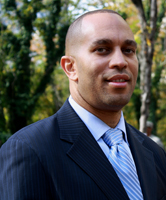