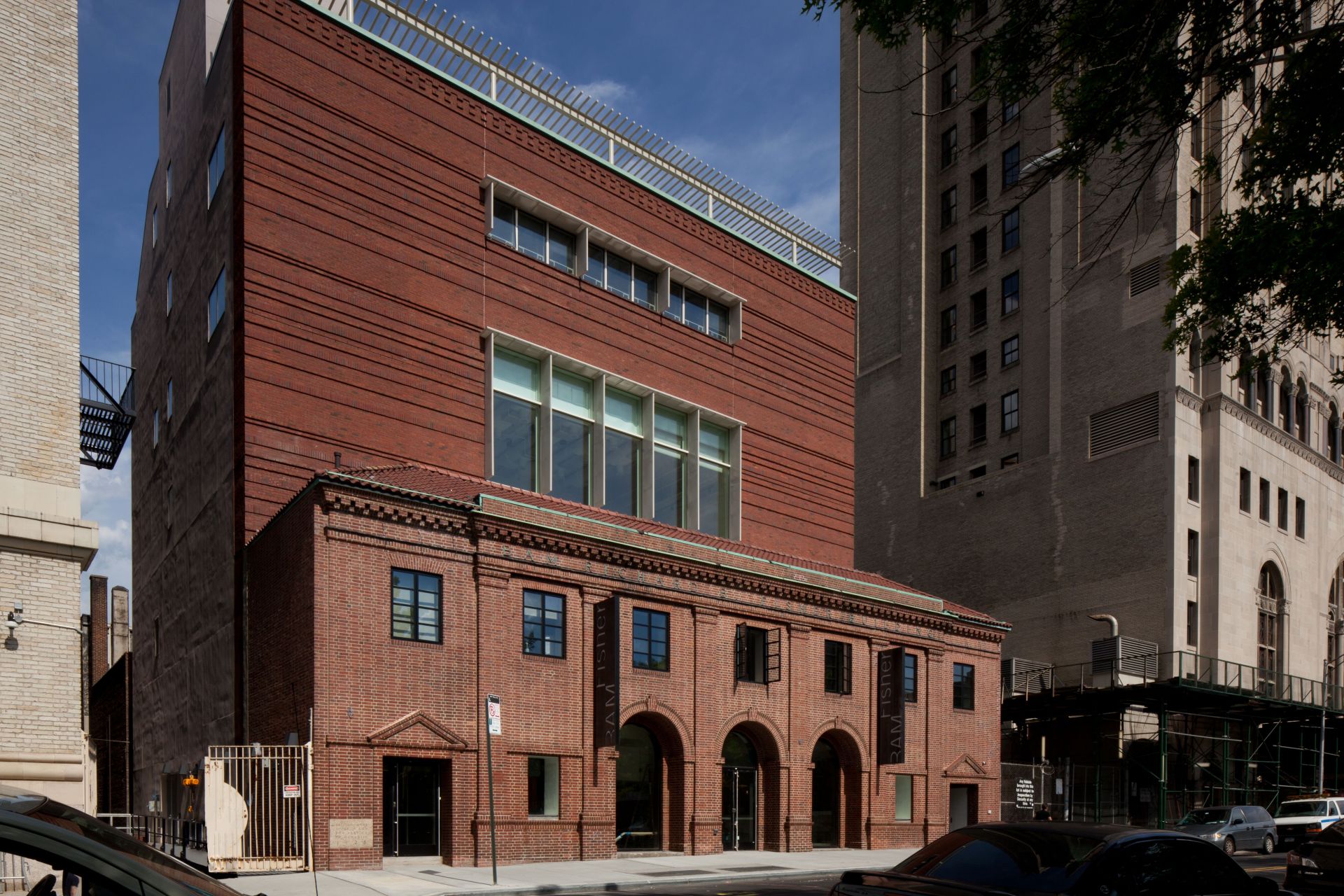 The building merges an existing facade with a much larger new one. (Julieta Cervantes) 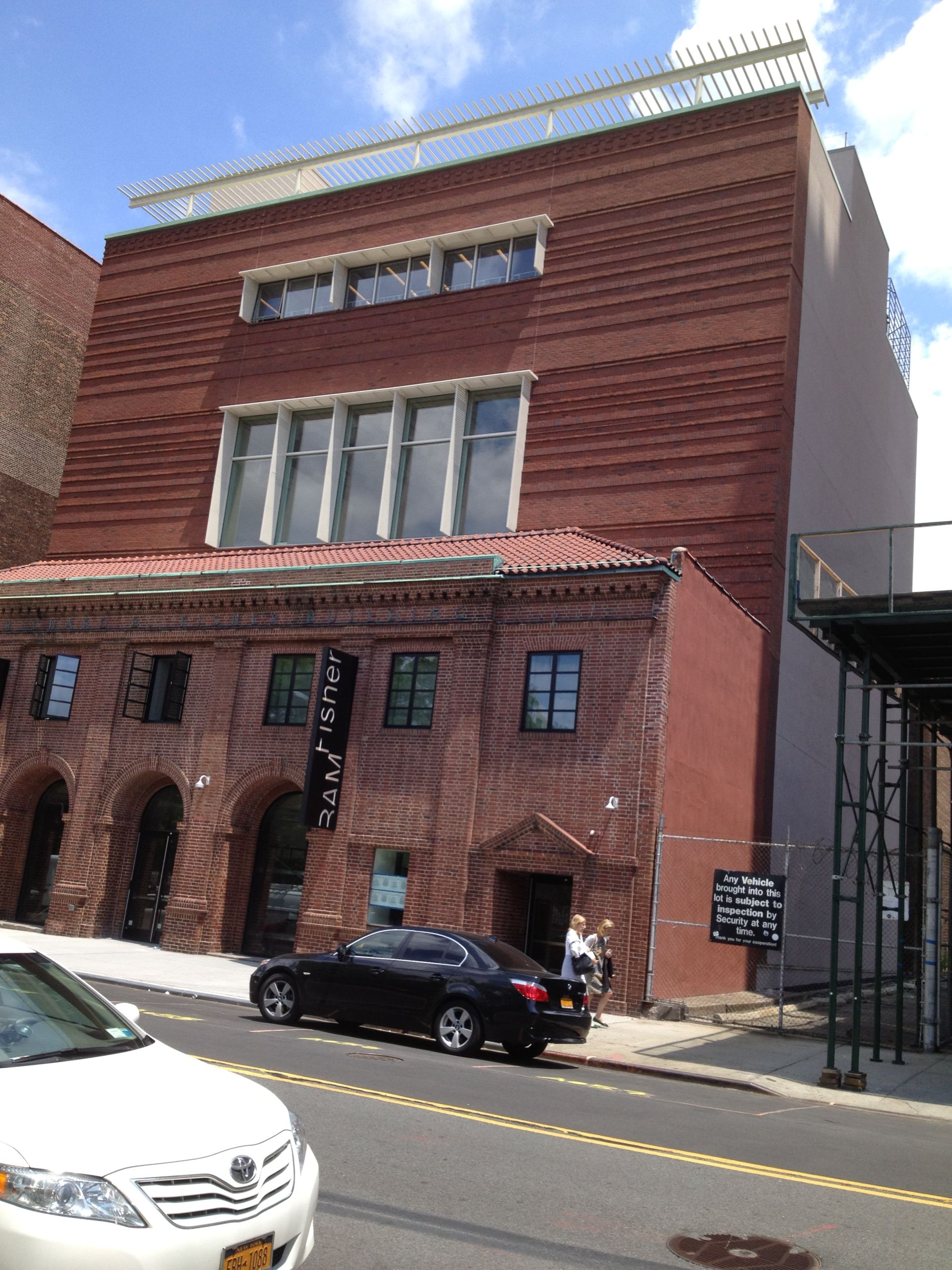 Bam Fisher is located on the site of the Salvation Army's former Brooklyn Citadel Corps at 321 Ashland Place. 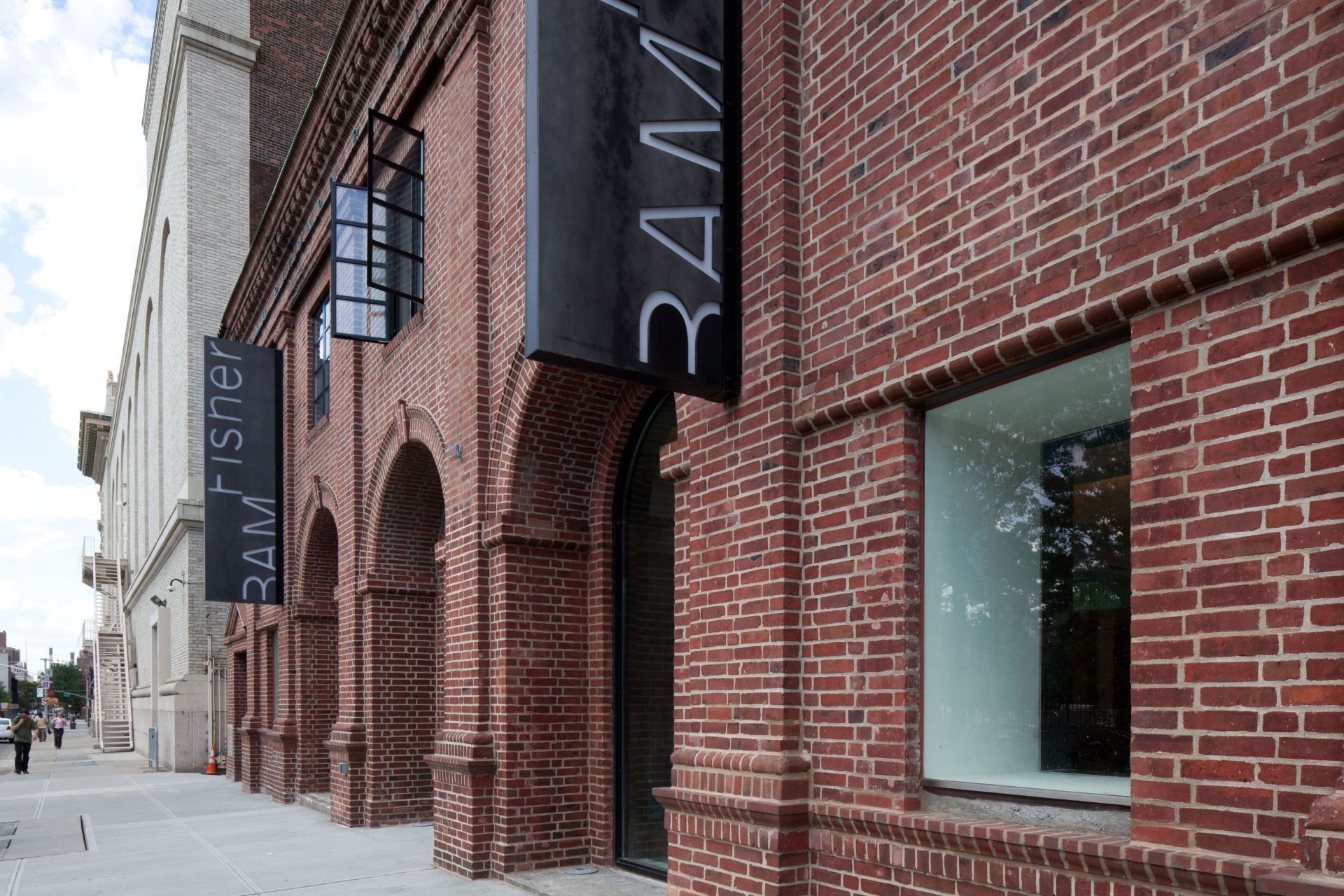 The building has not front stairs (Julieta Cervantes) 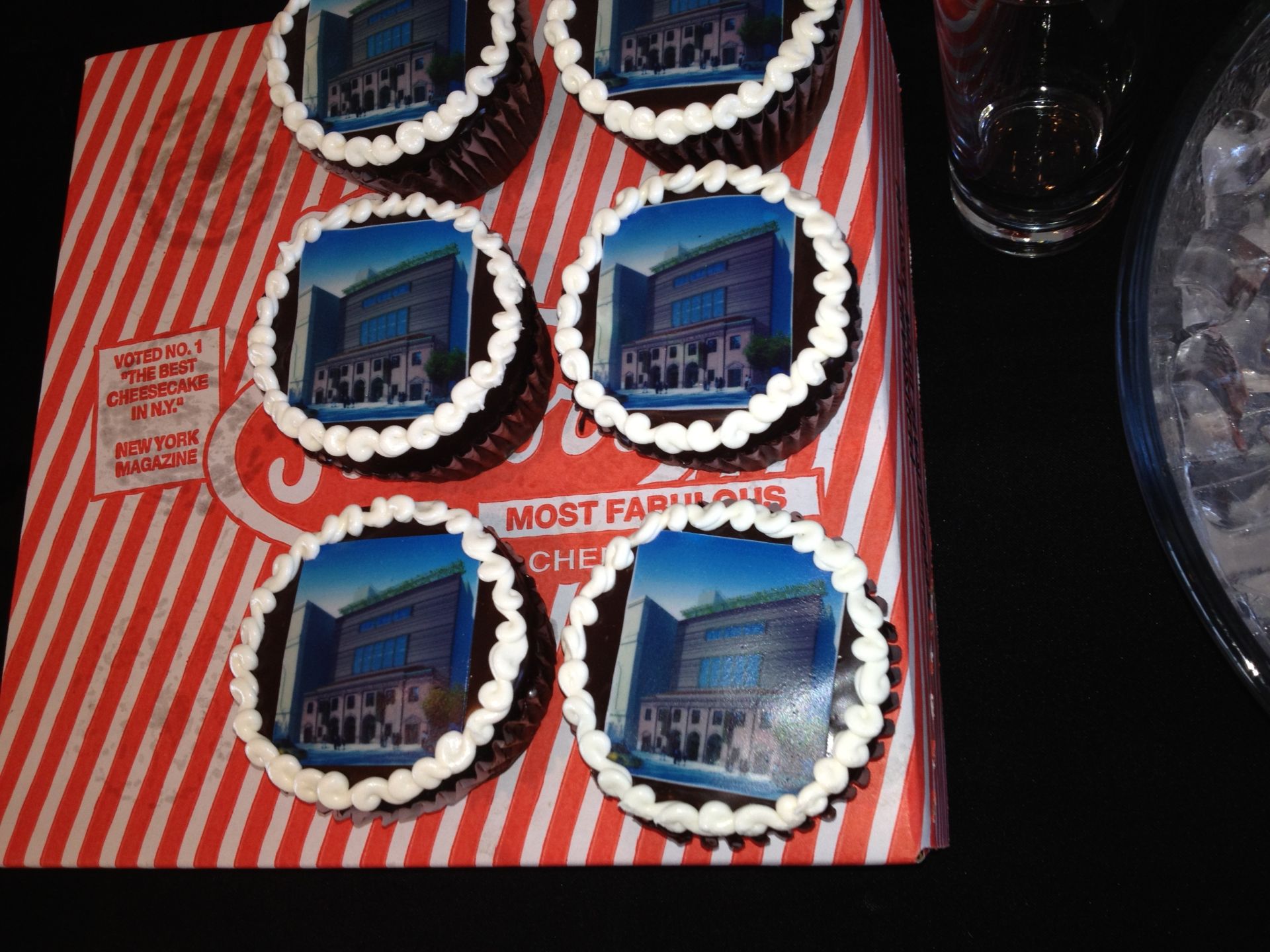 Chocolate cheesecakes from Juniors were imprinted with the image of the new building. Alas, we didn't see anyone chowing down on them.
Advertisement 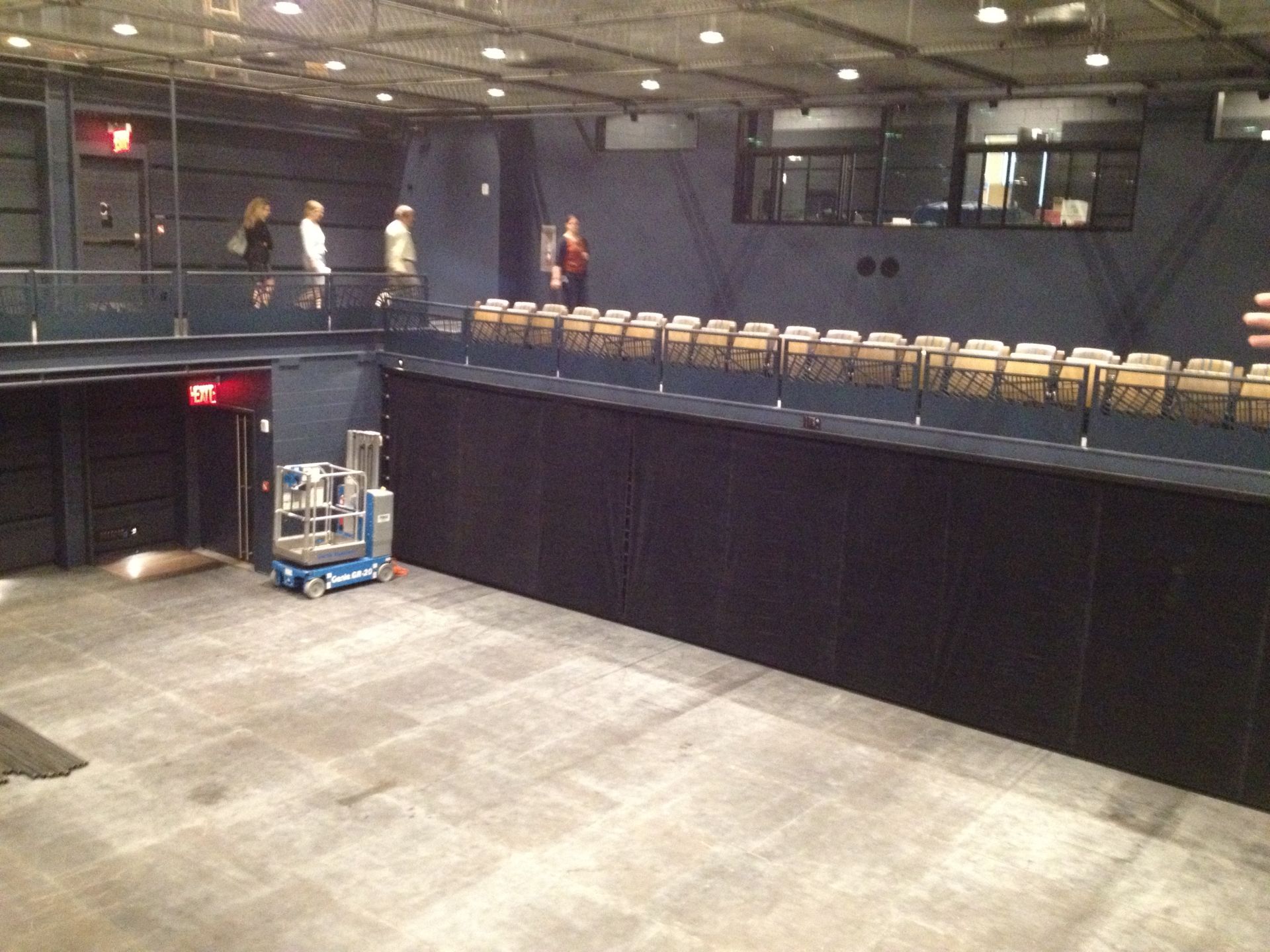 The 250-seat space is designed for maximum flexibility. 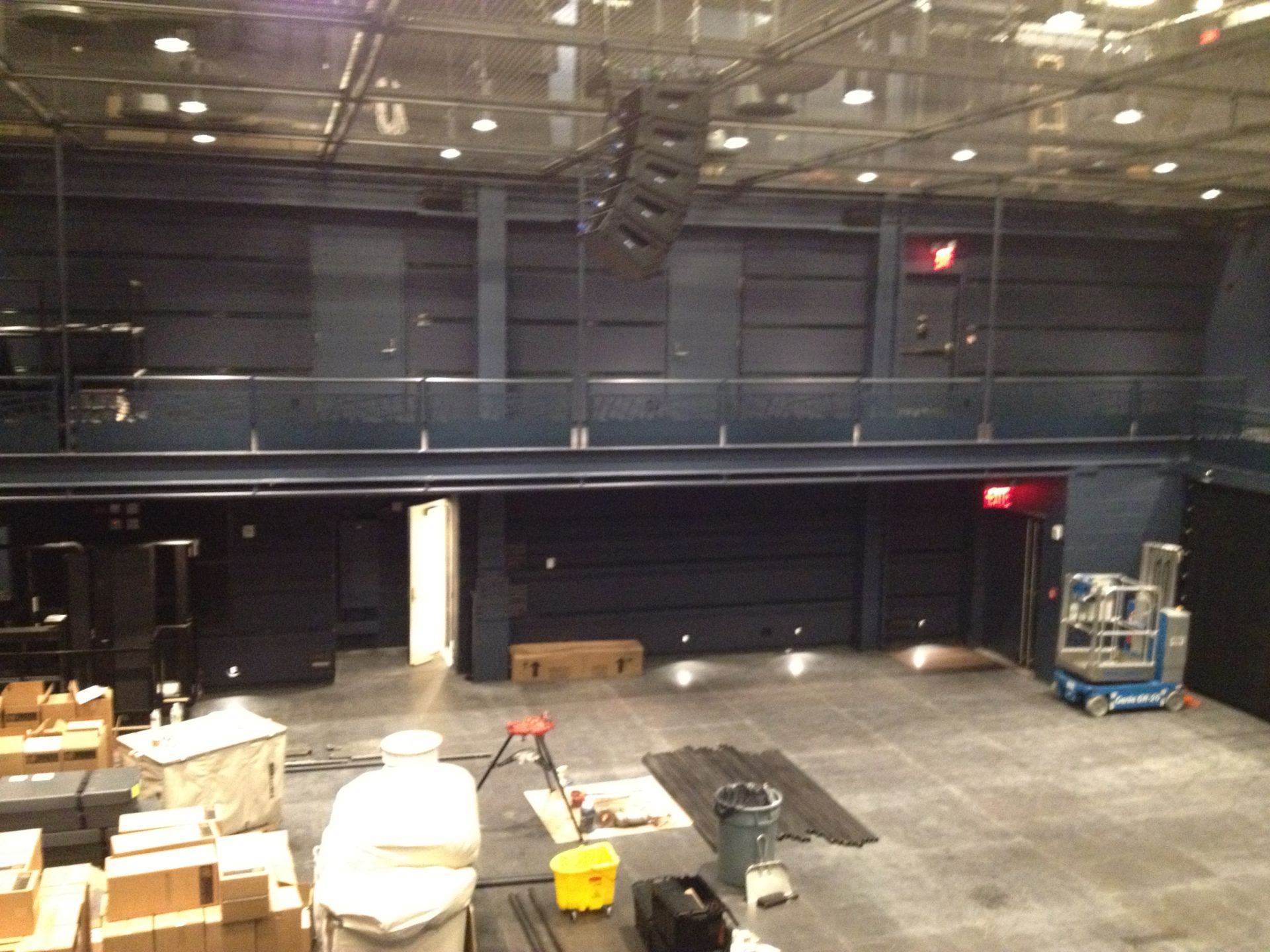 Bleachers retract into the wall and platforms materialize along the walls for a myriad of set-ups. 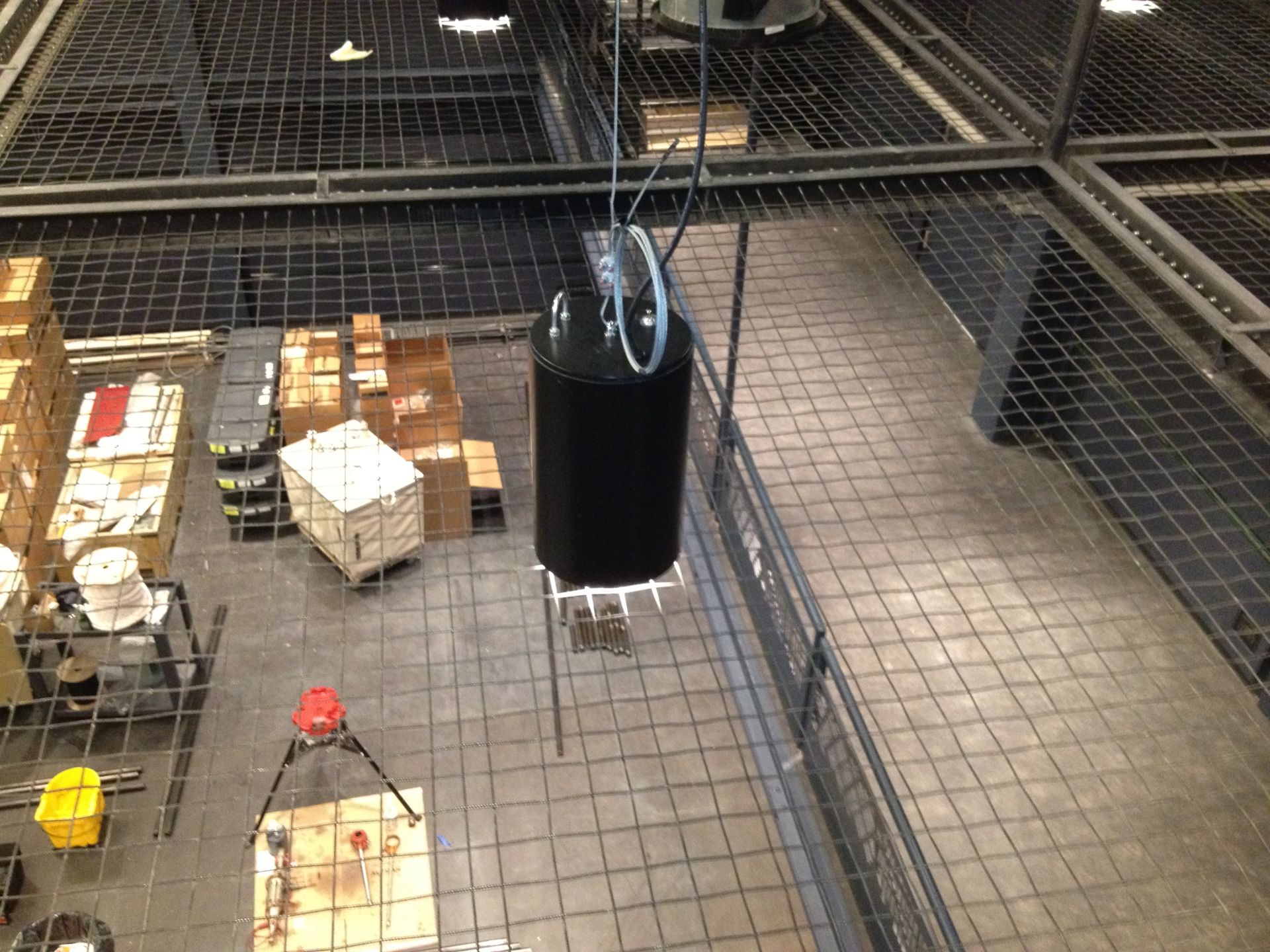 Forget catwalks: the lighting and sound crew can walk over the entire top of the stage with a metal tension grid.
Advertisement 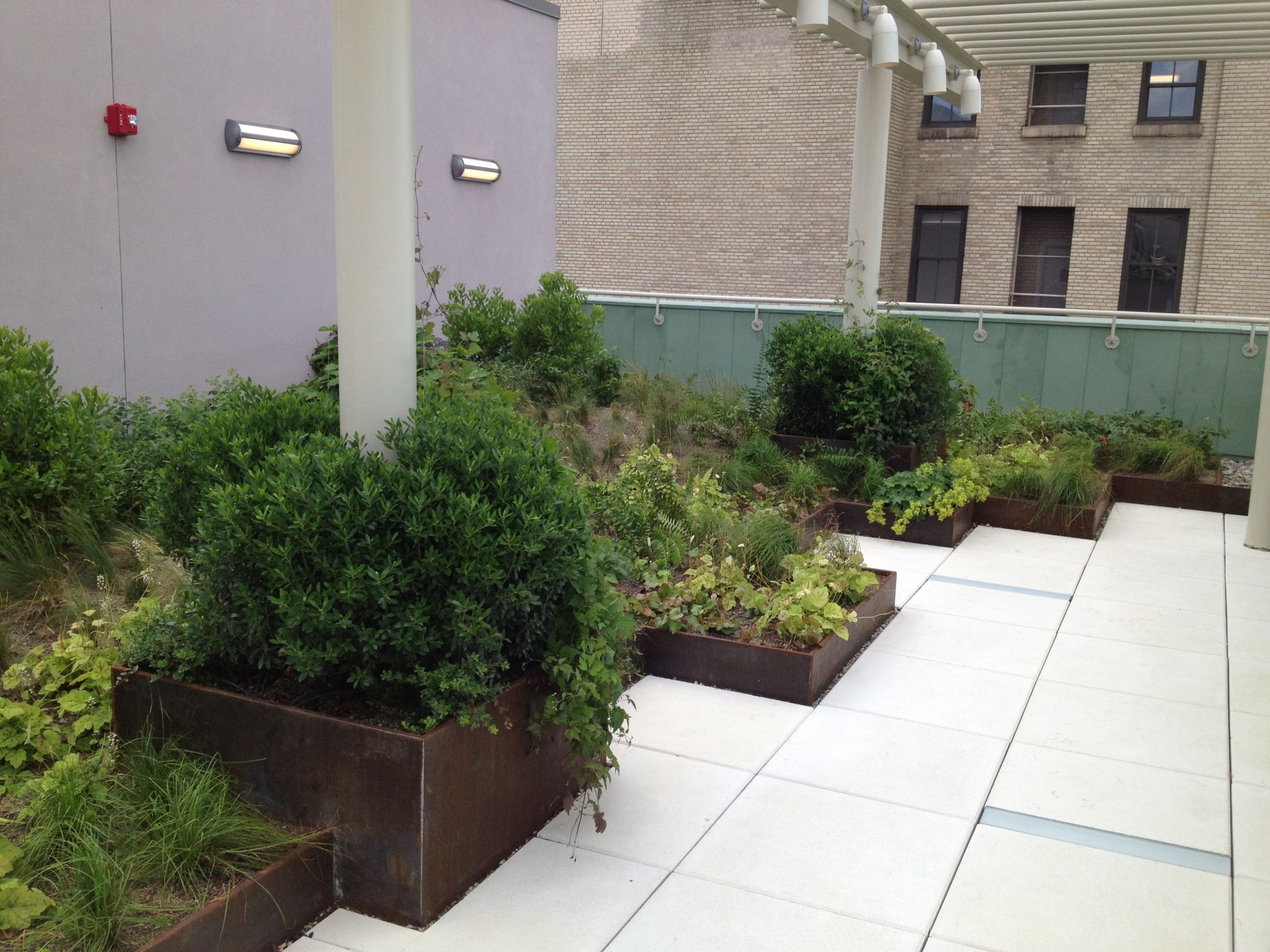 A roof garden. Bet your performance venue doesn't have one of these! 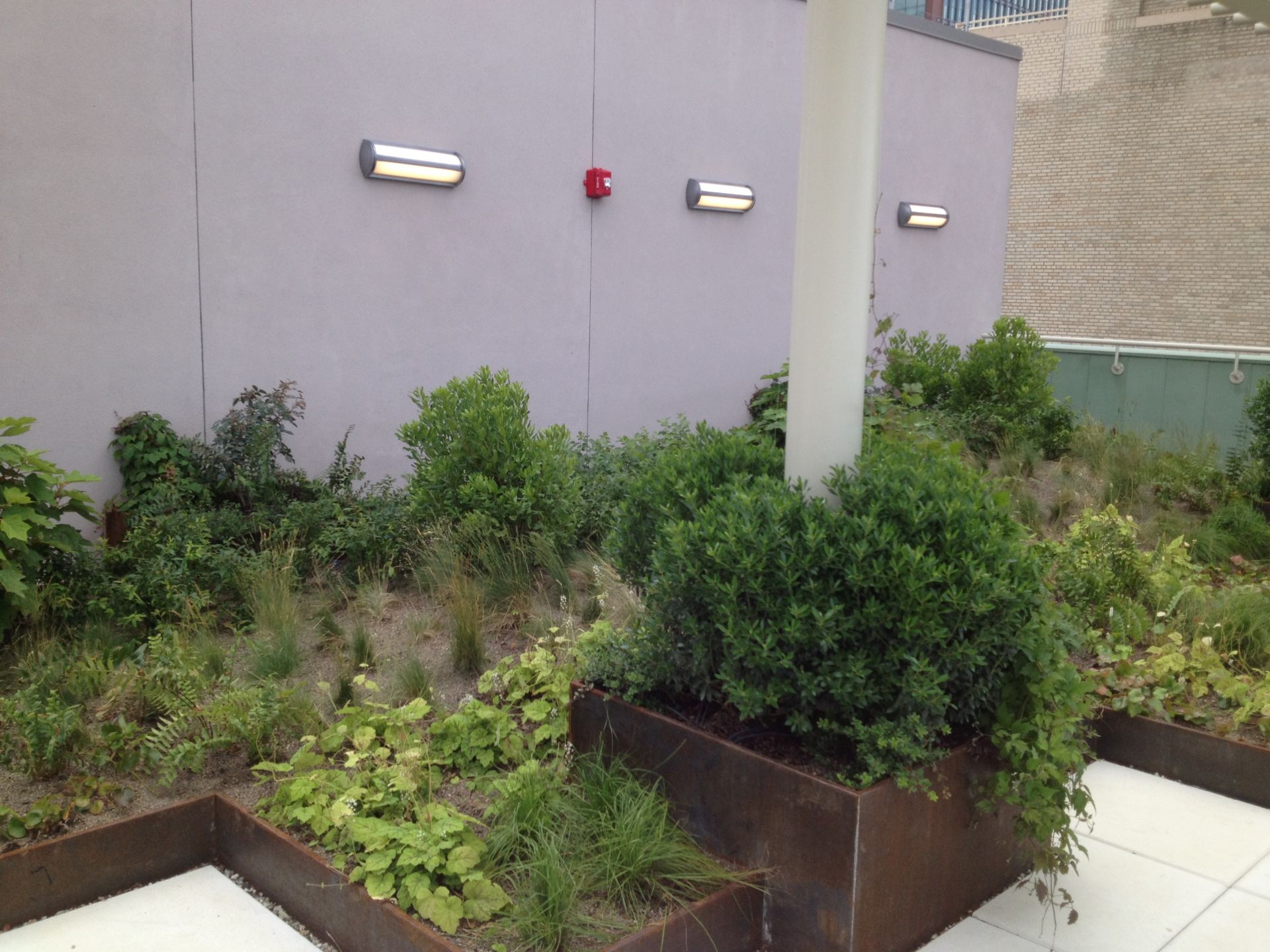 The roof garden is stocked with plants native to Brooklyn. 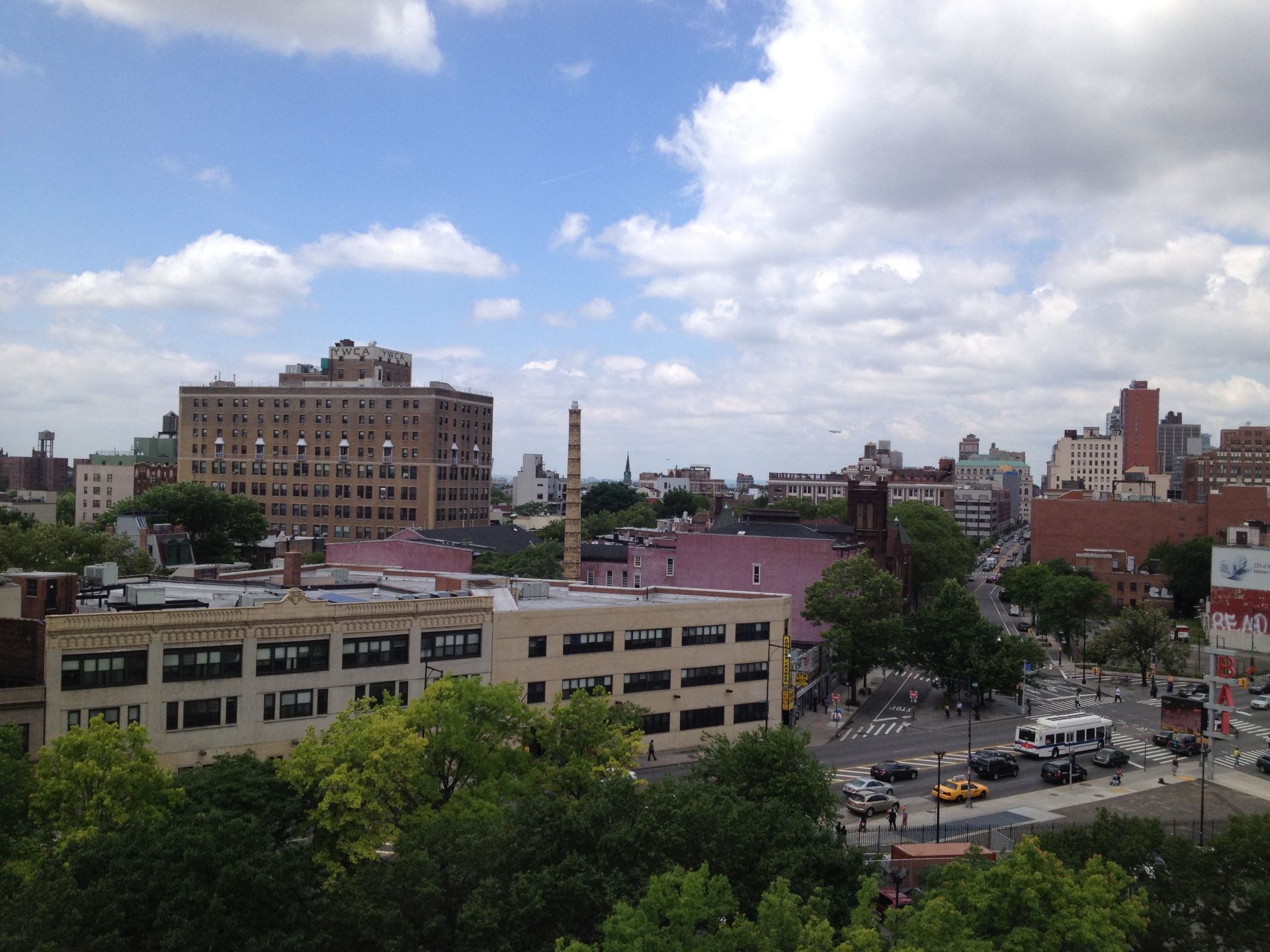 The view from the top of the 7-story building.
Advertisement 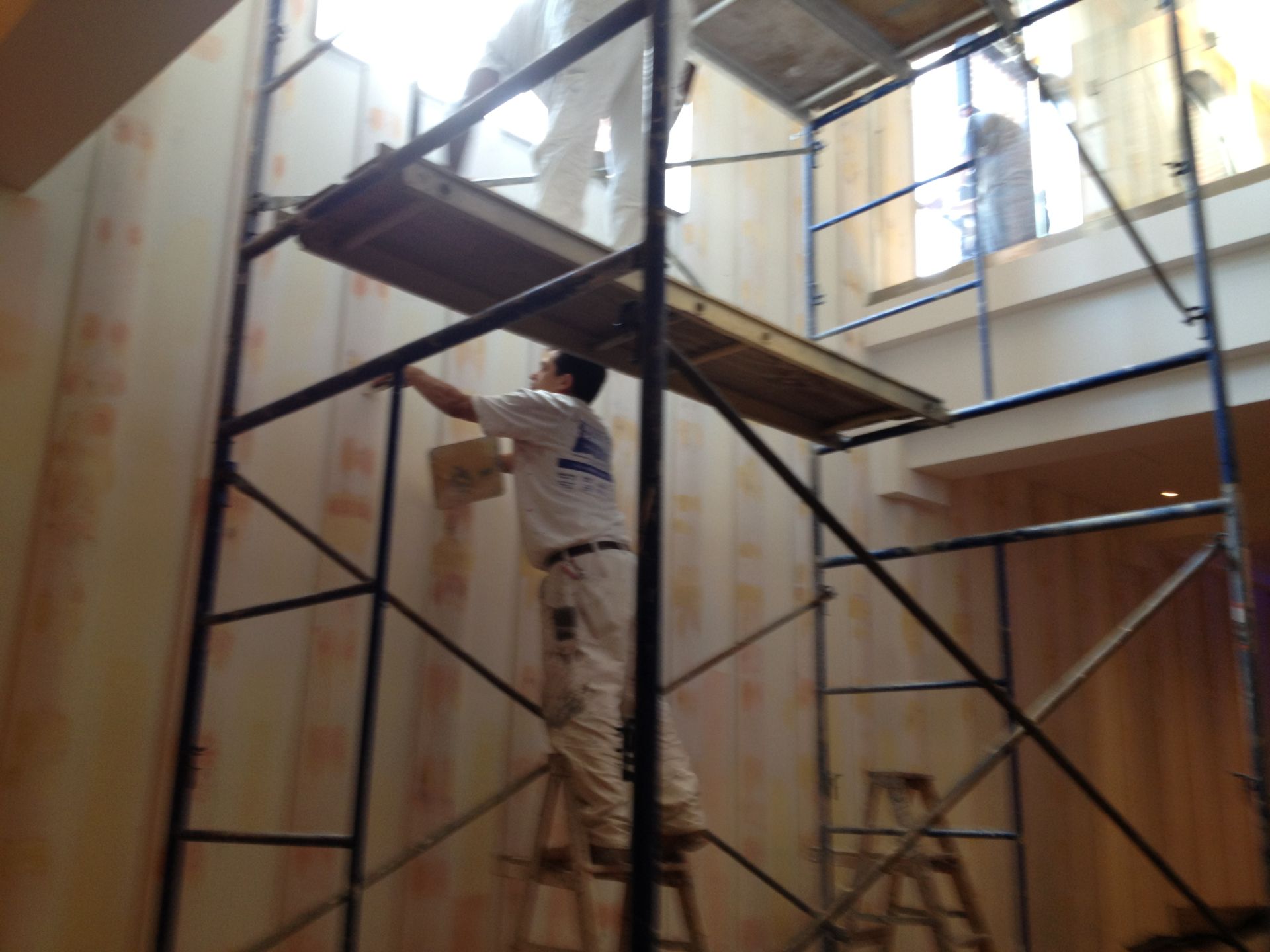 Workers are still busy finishing the building. It will open to the public in early September. 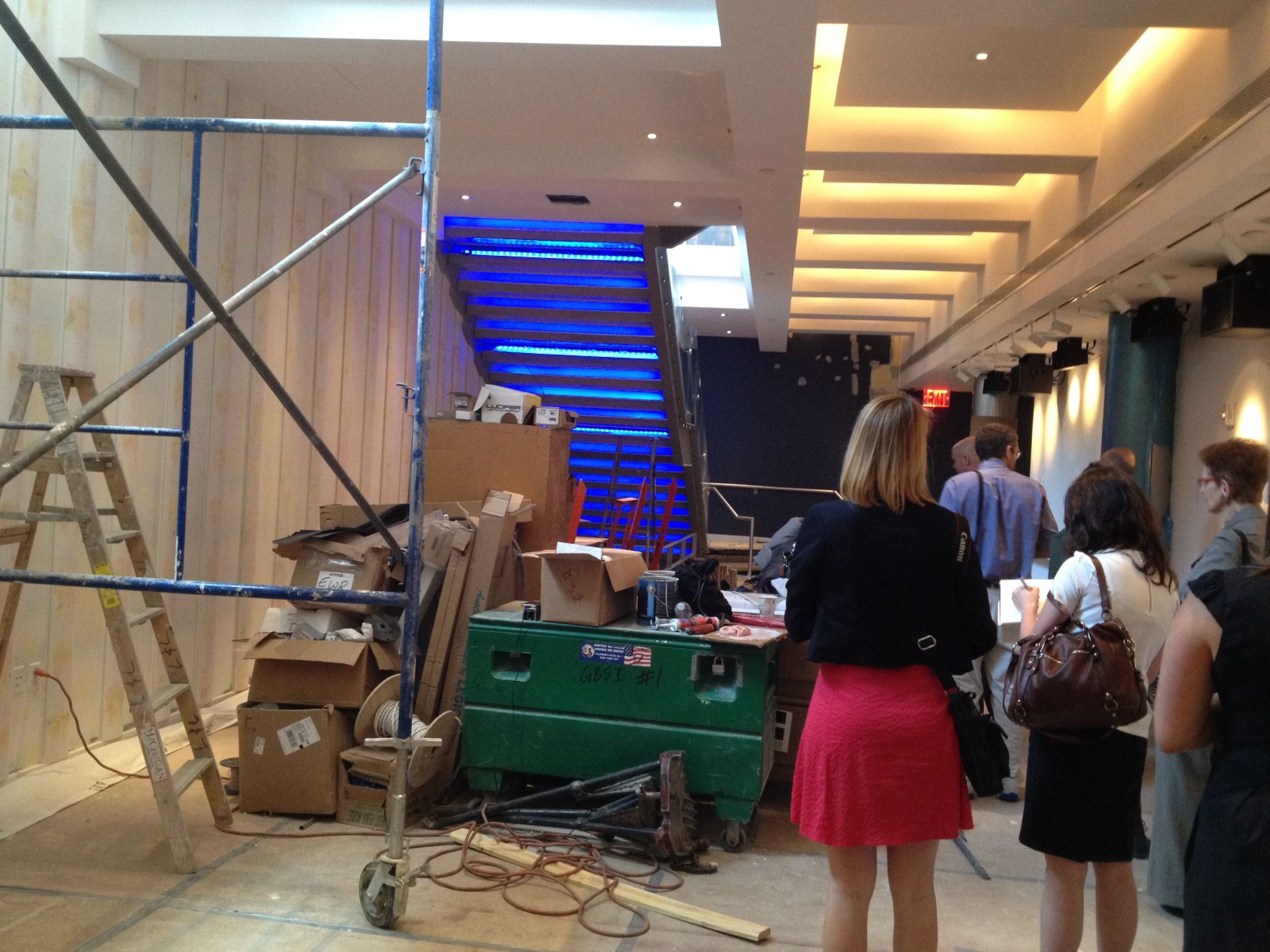 The downstairs area that will host concessions. 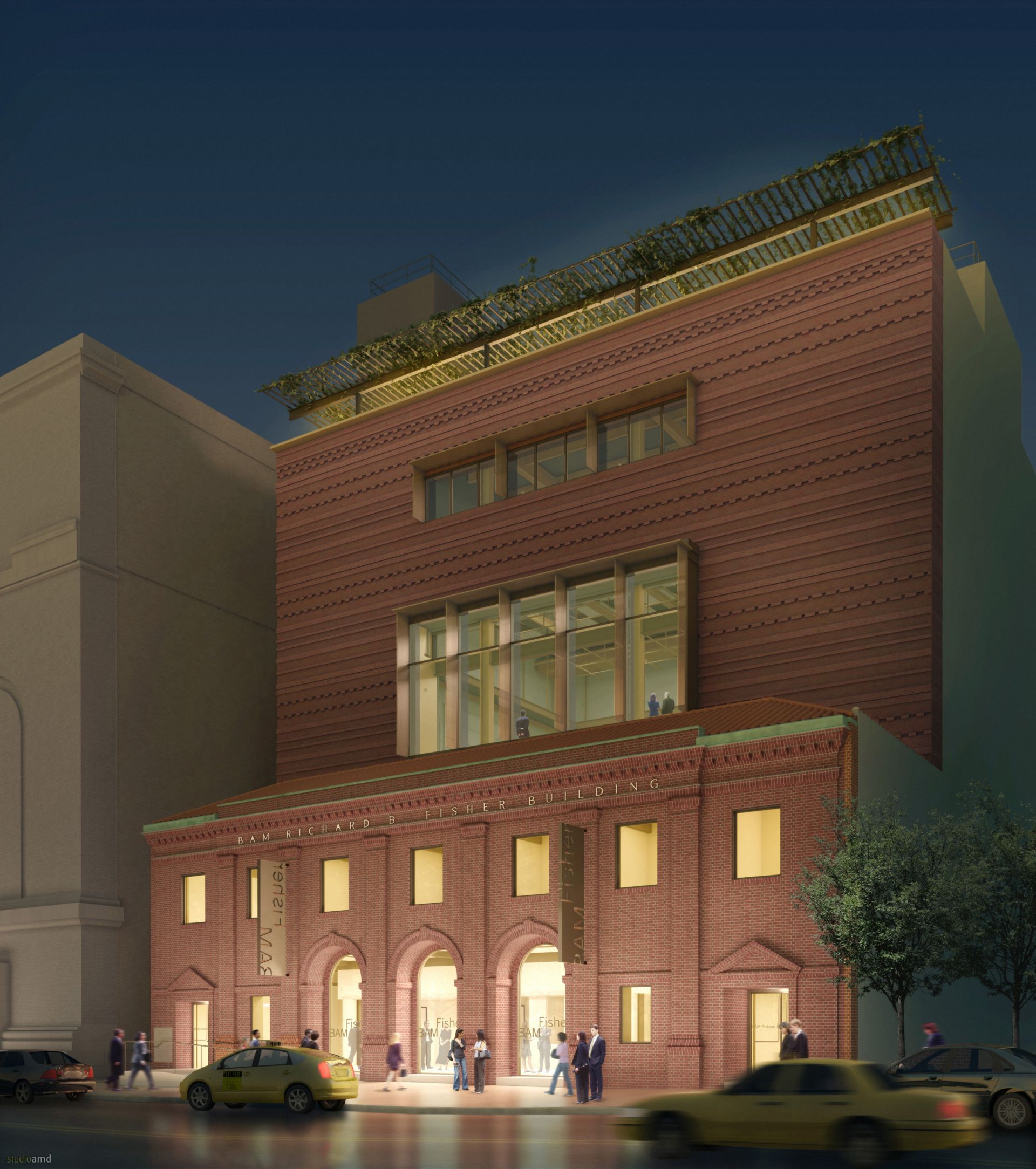 So it will look at night (H3 Hardy Architects) 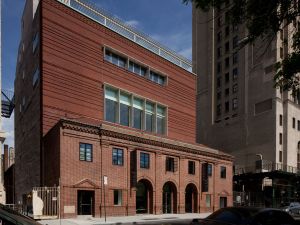 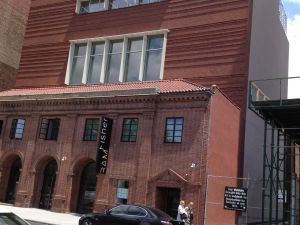 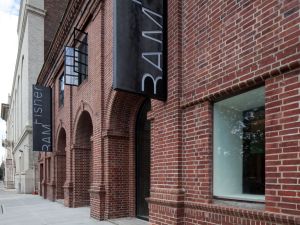 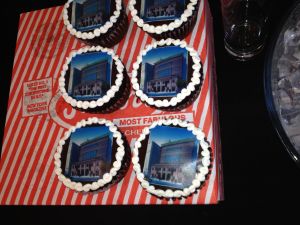 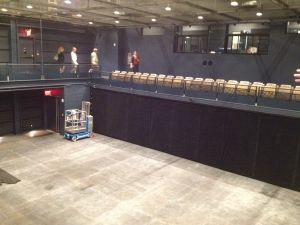 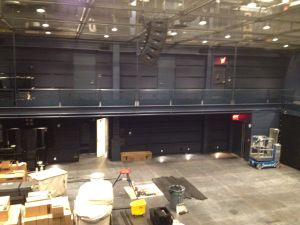 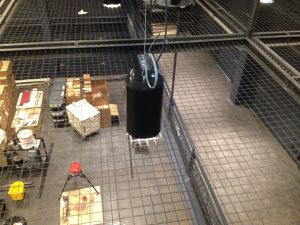 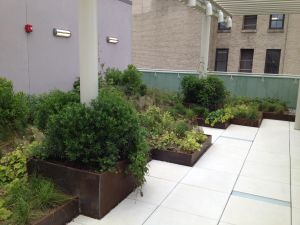 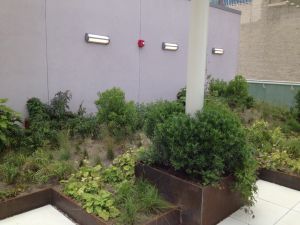 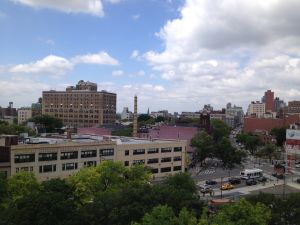 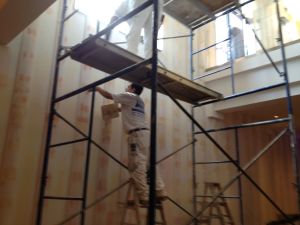 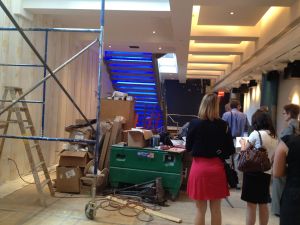 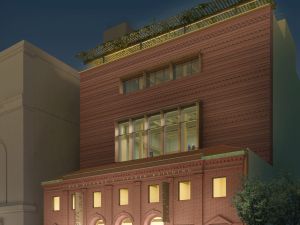 Besides the distinctive red brick arches, there is very little left of the old Salvation Army citadel that stood for years, vacant and crumbling, at 321 Ashland Place.

The citadel, like so many other parts of Fort Greene, has been transformed. A seven-story building—the Brooklyn Academy of Music’s new performing arts hall, the Richard B. Fisher building—now rises from its arches (“Landmarks won’t let you put a building on top of another building. Only Norman Foster got away with it on 57th Street,” Mr. Hardy remarked. “But we were able to convince Landmarks that it was complementary.”)

Scheduled to hold its first performance on September 5, BAM Fisher is ambitious when it comes to both its own future and that of the surrounding neighborhood, seeing its opening as a key turning point in the development of the Brooklyn arts district.  Indeed, BAM is one of many new cultural institutions coming to the area soon, among them the Theater for a New Audience and Barclay’s Arena (although Barclay’s cultural contributions are more dubious, it will mean venues ranging from 200 to 19,000 seats).

“The idea of the BAM cultural district is so powerful. It’s already happening. It’s got to happen. It’s truly amazing,” Mr. Hardy exclaimed Thursday afternoon when the building was unveiled.

As BAM representative after BAM representative emphasized, BAM Fisher wasn’t built as just a building, but as a way to engage with, and be more accessible to the community. Several of them brought up the fact that the sidewalk outside BAM Fisher was graded to rise to the door in a gesture of accessibility and symbolic welcome, eliminating the need for any steps, a fact that most residents will probably find less impressive than the $20 tickets to all Next Wave festival performances at the venue this year.

All community transforming goals aside, the building provides BAM with something it has long desired—a small, 250-seat black box theater that can host the emerging artists and experimental, intimate performances that the 875-seat Harvey Hall and the 2,100-seat Howard Gilman Opera House cannot. (BAM’s last small performance space, never ideal, became its cafe several years ago).

Besides the theater, the 40,000-square foot building also holds rehearsal space, classrooms for vastly-expanded arts education programs, offices and a swanky roof deck—a $50 million project that was funded with $30 million of city money, $3 million of state grants and private contributions.

“Most of the performing arts centers you see around the country are 20th century buildings. Edifice, edifice, edifice, plaza,” Ms. Brooks Hopkins told the crowd of reporters gathered for the tour on Thursday.

“We believe it will be the prototype for the 21st century performing arts center,” she gushed.

BAM was so excited about the whole thing that they even had mini chocolate cheesecakes from Juniors emblazoned with a likeness of the building. Impressive!

So what does a 21st Century performing arts center look like?

First of all, the rehearsal room is not in the basement, noted Mr. Hardy. “When artists see this, they say,” here he paused to adjust his bushy white eyebrows into a quizzical expression, “‘This is the rehearsal space?'”

Second of all, it has a roof terrace with a retractable roller-cover (a New York rarity save for a few select locations like the Gramercy Hotel) that offers expansive views of the borough (we even saw a blimp drifting across the sky). Its plants? Native and non-invasive.

“This is all local stuff,” Mr. Harvey said. “This is not imported exotica.”

It also has classrooms—a first for the arts organization—to run its many educational programs, now held in some 1,400 schools around the city, or in rented spaces. The classrooms, an expanded educational offerings, especially over school vacations, are meant to make BAM more accommodating to Brooklyn families.

But most impressive of all is the theater itself, painted not black but a midnight blue and built for maximum flexibility. Except for a single row of built-in fold-up seats (covered in blue and gold upholstery), almost everything else can be moved. Bleachers retract into the wall and platforms of seats can be moved into or out of the space and arranged in any configurations. Even the air conditioning vents can be moved to accommodate light configurations.

Above the stage, a metal tension grid replaces a catwalk—a slightly springy surface spanning the entire room that allows stage crews to place lights and audio equipment anywhere in the room (“I should have worn pants!” cried one woman on the tour as she looked down at the stage far below her feet).

The area is wired with all variety of digital and audio equipment. In fact, there is so much electrical conduit in the building that they actually had to do tests to determine that there was enough concrete to make it safe, explained one of the BAM bigwigs.

“Which it is,” he assured the group, perhaps seeing the somewhat perplexed expressions.