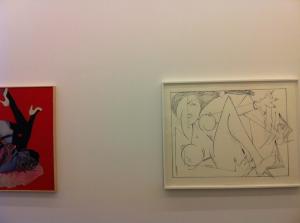 From Ms. Garcia’s Facebook page: “This is what the work was supposed to look like installed next to the Roslyn Drexler piece.”

Just before the opening of the “In the Pink” group show at Joe Sheftel Gallery last night, Kathryn Garcia’s drawing Carla O. Lisk was removed from the wall and placed in the gallery’s upstairs office. According to Art Fag City, this was done against the wishes of both the artist and the show’s curator, Sarvia Jasso, after Mr. Sheftel sent Ms. Jasso an e-mail saying the piece had been taken off the wall. The drawing, however, remains on the show’s checklist.

[Joe Sheftel said] it was still part of the exhibition because it was on the checklist. After a conversation where I expressed all of my concerns—including that he was undermining my curatorial decision and that it was disrespectful to everyone involved, including all of the artists in the exhibition—he refused to place the drawing back in its place.

[It’s] ironic that the show is about women having control of their body and this dealer: Joe Sheftel, is trying to take control from the female curator, Sarvia Jassp [sic] 30 minutes before the show opened against her wishes.

“In the Pink” is described by a gallery press release as “a group exhi­bi­tion fea­tur­ing paint­ings, draw­ings and pho­tographs that unabashedly explore the plea­sure—and ten­sion—of look­ing at the female body. While some fig­ures twist and turn spas­mod­i­cally, reveal­ing fleshy exposed ori­fices, oth­ers are seem­ingly caught in sta­tic, pri­vate moments.” We are waiting to hear back from Mr. Sheftel about the situation.

Update, 6/22 3:27 p.m.: In a phone call Friday afternoon, Mr. Sheftel said, “We use both the lower level and the office level as a viewing space, so basically the exhibition continues upstairs.” He said that Ms. Jasso was not around for the installation due to a family matter, so he was left to figure out what art went where. “The artist was not happy with how the work was hung in the show, but it was never removed.”

To remedy the situation, both Ms. Jasso and Ms. Garcia will be in New York in July and will do what Mr. Sheftel calls a “performative install” in the gallery in which the artist will symbolically “break out of the frame where she’s currently hung.” We will let you know more details about that when we have them.

For what it’s worth, the original Art Fag City post that broke the news of this story, consistently spells Mr. Sheftel’s name wrong, calling him “Scheftl.”