Last night The Observer cornered Manhattan Media CEO and mayoral candidate Tom Allon at an apartment on Spring Street, where the savvy New Yorker was managing to combine his special day with some work stuff.

We had arrived in the middle of one woman’s speech about why Mr. Allon’s views on teachers was inspiring. (Mr. Allon had taught English at Stuyvesant High School after graduating from Columbia, after all.)

After the woman had tearfully finished, we approached Mr. Allon. “As someone who has to balance a media and political career, who is your inspiration?”

“I guess Bloomberg is the only person who comes to mind, but he has a very different kind of media company than I do. I think of myself not just as a newspaper or a magazine publisher, but an educator.”

Well, Pulitzer and Hearst made this town, we reminded him. So why even bother with politics when he already had the power of the press?

“I don’t want to be in politics,” Mr. Allon told us. “I want to be a public servant. I’ve been a media person for 25 years and I’ll probably be a media person after I leave office, but I decided to run after I tried to change the administration standards at my old high school and realized how they weren’t going to change, no matter how many articles about the issue I banged out.”

With that, we let the perhaps future mayor go back to receiving his birthday wishes and congratulations…mostly, we noticed, from schoolteachers who had come to toast their new champion. 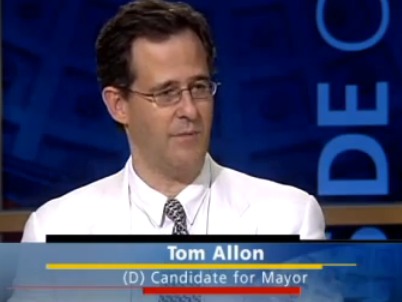