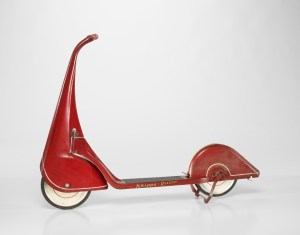 The Museum of Modern Art has announced a massive survey of 20th-century design for children, “Century of the Child: Growing by Design, 1900-2000.” The show will bring together 500 items, many of which will be on view for the first time in the U.S.

The show will be divided into seven sections:

-Children and the Body Politic

Of the many works on display, some highlights include Lyonel Feininger’s comics, Alma Siedhoff-Buscher’s Bauhaus nursery, a Skippy-Racer scooter from 1933, Roald Dahl’s The Gremlins, Lego building blocks, the Slinky and a selection of original pieces from the set of Pee-Wee’s Playhouse. There will be a section of the Playhouse wall along with several characters from the show (Conky, Globey and Clocky). Ah, memories!

“Century of the Child” opens July 29 and will be on view until Nov. 5.