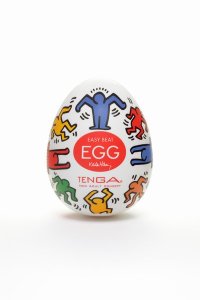 Keith Haring Dance Egg. The Keith Haring version of one of Tenga’s most popular toys, the “Egg” and “Cup.” (Courtesy Opening Ceremony)

Dana Jennings takes a look at a number of new art books, including ones by Robert Longo and Ryan McGinley, whose photographs, she writes, “are songs of innocence.” [NYT]

Shepard Fairey’s new mural is unveiled in London’s “Pleasure Garden.” Here’s a slide show of some of the other street art on view. [The Guardian]