Former Mayor Ed Koch, Congressman Jerrold Nadler, Councilman David Greenfield, Assemblyman Dov Hikind gathered with several other elected officials in front of the Museum of Jewish Heritage in Battery Park this morning for a press conference billed as an effort ” to Denounce Charles Barron as Enemy of the State of Israel” and the Jewish community. The politicos who showed up at the event where longtime councilman Mr. Barron was branded “hateful,” a “scary monster,” “anti-Semite” and “bigot” also expressed their support for his rival in the congressional race, Hakeem Jeffries.

“What prompted me … speaking of people that just are not familiar with Charles’ record and they just dont know who Charles Barron is, that’s a very scary thing. Right?” asked Councilman Greenfield, who organized the event. “People are not familiar that there’s an individual who’s running, who we all know very well, who is an anti-Semite, who’s a hate-monger and who’s a bigot. I think it’s very important for us to educate the public and let them know who this individual is.”

Like Mr. Greenfield, the other elected officials at the press conference said they felt it was important to make people aware of controversial statements Mr. Barron has made about Jews, in support of foreign dictators and comments critical of Israel.

“We usually have elections in this country, in this city where the differences are differences of degree, you like this one better than that one, this one is more effective, this one is a little more liberal, that one is a little more conservative. And sometimes, there’s real rhetoric about this one is terrible. Usually, that’s not true,” Mr. Nadler said. “This time it is true. You’ve got a reasonable candidate and a digraceful, dangerous candidate. That is very rare and we have to make sure people understand that.”

Mr. Nadler was specifically concerned by Mr. Barron’s statements comparing the Israeli government’s treatment of Palestinians to the holocaust. He carried a few selected quotes made by Mr. Barron on a small slip of paper.

“When he compared what the Israelis are doing in Gaza to the conditions Nazis imposed on the Jews. Where is the Auchswitz? I mean, come on. That is so irresponsible, and so libelous and so disgusting,” said Mr. Nadler. “To compare Israel to Nazis, calling what Israel’s doing genocide? Israel’s trying to survive in a tough neighborhood….They’re not doing anything like Nazis. To even put them in the same universe is a disgrace to the English language….His election to Congress, to some extent, would legitimize this kind of anti-Semitic discourse and we don’t need that.”

In addition to Mr. Barron’s criticisms of Israel for its treatment of Palestinians, the elected officials also referenced statements he has made praising the foreign dictators Mummar Qadaffi and Robert Mugabe, and a remark he made implying blacks are the “Semitic people” rather than Jews. The participants at the press conference said they felt it was especially important to raise awareness about Mr. Barron’s record because the race for the congressional seat being vacated by Ed Towns is the only contest in the upcoming June 26 election.

Mr. Koch, who described Mr. Barron’s past remarks as “vicious”  explained that it was an “unusual election” that might not has “as high a turnout” as a vote with more offices on the table. The ex-mayor said he expected Mr. Barron’s supporters would get to the polls, but he believed others would “rush to the polls” to vote for Mr. Jeffries if they were aware of Mr. Barron’s history.

“That’s why we’re here. We’re saying Barron is no good. I can tell you. I knew him,” Mr. Koch said. “Now Hakeem Jeffries is a unique guy. He’s a star….I admire him. He’s a first class guy who would represent this district in a first class way.”

Mr. Nadler clarified that they saw no indication Mr. Barron was likely to win, but they want to make sure he has no chance in a low interest, low turnout race.

“If you have a demagogue like Charles Barron, he’s got his little group. They will come out to vote because they’re his group and everybody else, very few might come out to vote. So, we’re here to warn people that this is a very important election,” said Mr. Nadler. “We’re not here to say that we particularly see a great outswelling of support, God forbid, for Charles Barron. But he’s got his group, they will vote.”

All of the politicians in attendance said they would be endorsing Mr. Jeffries and would give him their support. Mr. Hikind, who said he had not spoken to Mr. Jeffries about the event, described the race as a “no brainer” for local leaders and voters.

It is worth noting here that Mr. Jeffries did not attend the event, and it is unclear how the support of a handful of Jewish pols will help him in a district that remains majority African-American and decidedly liberal.

“I really feel that Hakeem Jeffries is a superstar. He’s really a solid political figure, a community leader, articulate, you name it,” Mr. Hikind said. “The people need to look at the entire picture….I think if they look at everything, they will see, hey, you can get a superstar, or you can get somebody who’s a racist. Make your pick, make your choice.” 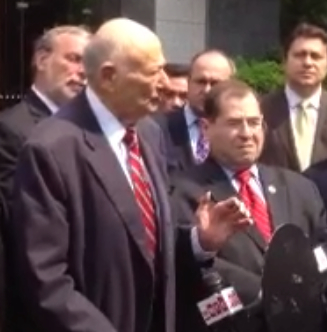