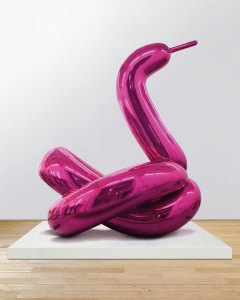 Going by Adam Davidson’s logic in his recent New York Times Magazine article—the art market is “a proxy for the fate of the superrich themselves”—fans of the 1 percent will be thrilled to hear that sales were full speed ahead at least week’s Art Basel fair, despite Greece and Spain and myriad other global economic woes. One afternoon, an artist turned up outside the convention center with an unsanctioned artwork—a giant mousetrap poised to snap on a bunch of giant euros—and was swiftly removed by a bunch of guards, Masque of the Red Death-ishly.

When dealers and collectors weren’t buzzing around inside the convention center, they were at dinners and parties of various kinds, and while there was an outrageously elaborate one on the fair’s first night co-hosted by New York’s Barbara Gladstone and the two women who run the London and Berlin gallery Sprüth Magers—on the terrace of the stately building that fronted a riding school in the countryside outside of Basel, before the 200 guests headed down a long, tree-lined allée to another building, where table after table was laden with piles of peonies, a woman stood gazing out at the manicured garden complete with ancient statues and observed, in a scene that if not for her comment would have been straight out of Last Year at Marienbad, “Why should I have to work so hard to understand all that political art at Documenta,” or something to that effect—people seemed to spend a lot of time out at the Beyeler Foundation. And here’s where things get especially interesting for you, New Yorkers: the Beyeler Foundation currently has a pretty substantial, Hugo Boss-sponsored exhibition of the work of Jeff Koons, whose museum-filling retrospective in 2014 will be the swan song (pun very much intended … read on) for the Whitney in its Breuer building, before it decamps to its new, $720 million, Renzo Piano-designed digs in the Meatpacking district.

But let’s close down the cash register and hear what Mr. Koons has to say for his art. There he was at the Beyeler on Thursday afternoon, speaking with the show’s curator,
Theodora Vischer on the terrace to a packed house that included Whitney curator Scott Rothkopf, who’s helming the Whitney show.

Here are some of the things he talked about. He talked about the “sense of family structure and community that you can pick up in the grouping” of his vacuum cleaners. “The triple-decker in the center is like a papa bear, mama bear, baby bear.” He talked about art’s “ability to empower us, but you have to have self-acceptance first” and how art can “disempower by making people feel insecure” and “not worthy,” and how, with the “Banality” series, he was “trying to tell the viewer that they are perfect.” He said that “the art happens inside them” and “whatever moves you is wonderful and equal to anything else … whether it’s in a high cultural institution or a gift shop.” He talked about “the removal of anxiety” and how his porcelain Popple doll from “Banality” was “almost like in the Garden of Eden some little figure would come out and make a little noise and then go run behind a tree or something” and “the removal of judgments” and how “children don’t have judgments” and “can love the color blue just for the blueness of that sky.” He talked about the “Celebration” series being “based on a cyclical year,” and how the four posts on his giant diamond piece (not at the Beyeler but, n.b. from this writer, one sold at Christie’s five years ago for $11.8 million) are “symbols of male energy” and the diamond represents the “moment of creation.” He said human history is “our genes and DNA” and “the only narrative I really trust is the biological narrative.”

I’d read Mr. Koons quoted on this biological narrative stuff before, but, standing out there in the Beyeler’s bucolic backyard, where the setting—birds chirping, late afternoon sun slanting down through tall trees onto the lily pads on the pond—conspired with his soothing voice, it hit home in a new way. Aha, biology. Consider Hanging Heart, which might as well, by that logic, be Hanging Brain, rivers of oxytocin gushing through it, convincing its owner that she’s “in love.” But let’s say it is a heart. Well, then, biologically speaking, it’s, you know, a heart. And in that case Hanging Heart isn’t what you thought it was, a rom com set in a candy shop. It’s a torture porn horror flick set in a meatlocker on the outskirts of Bucharest.