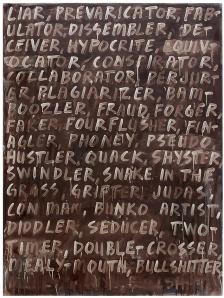 Late last week, Artnet magazine revealed on its Twitter feed that the Jewish Museum was planning a Mel Bochner retrospective. Today, Carol Vogel has the details in her Inside Art column: it’s set to open in May 2014 and “will focus on his thesaurus-inspired paintings — canvases that chart his nearly 50-year exploration of words, language and text.”

Ms. Vogel notes that Mr. Bochner, 72, was once a guard at the Jewish Museum. Not a very good one, as it turns out:

“When he was a guard at the Jewish Museum in New York nearly 50 years ago, Mel Bochner was leading a double life. ‘I would work at the museum all day and paint all night,” he recalled in a telephone interview. ‘I would come to work tired. One day I got caught taking a nap behind a Louise Nevelson sculpture and got fired.'”

Congratulations on the show, Mr. Bochner.