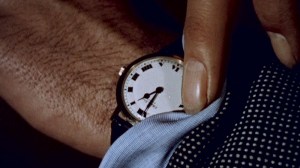 Well, here’s a reason to stay in New York during the dead zone of July and August: Christian Marclay’s 24-hour film The Clock, which counts down the hours and minutes of a full day in real time using clips from movies and television that depict time passing, will be screened at Lincoln Center’s David Rubenstein Atrium July 13 through Aug. 1. It will be shown Tuesdays through Thursdays 8 a.m. to 10 p.m. and continuously starting Fridays at 8 a.m. through Sundays at 10 p.m. Like most commercial galleries, it won’t be open for business on Mondays.

The Clock was last seen in New York at the Paula Cooper Gallery in the winter of 2011, where it caused quite a sensation. People waited for hours on the street to see it. At least this time around the weather will be warmer.