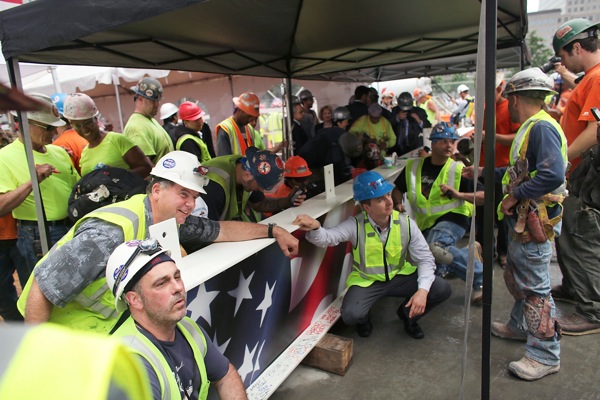 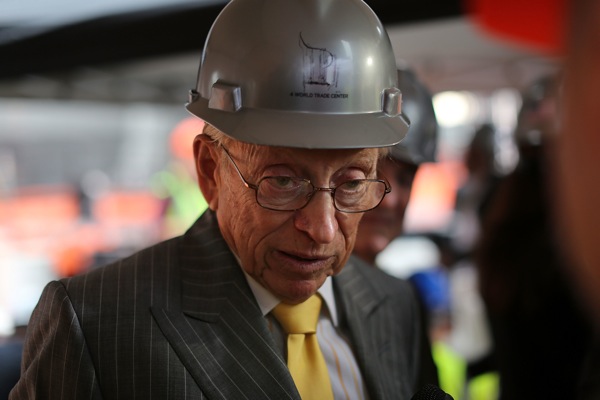 Larry Silverstein talks to the media in his hard hat.
mchabanobserver 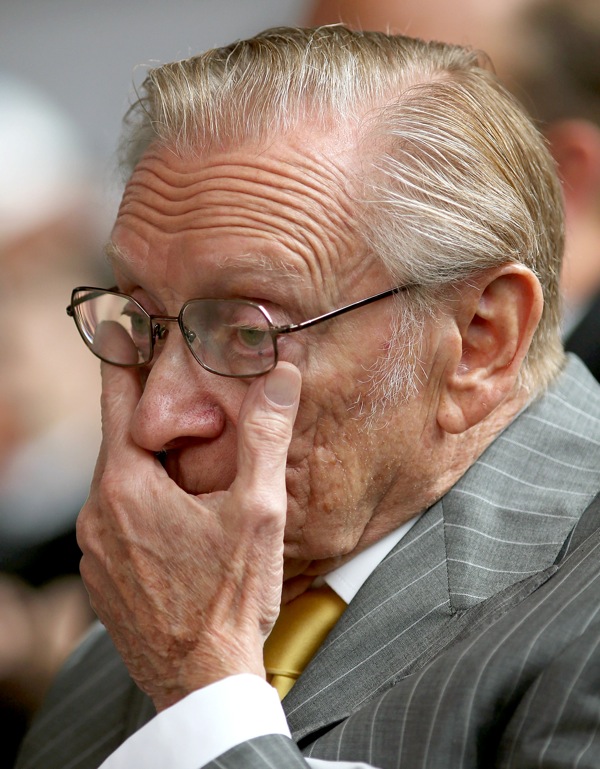 Mr. Silverstein clears his eyes during the speeches.
mchabanobserver 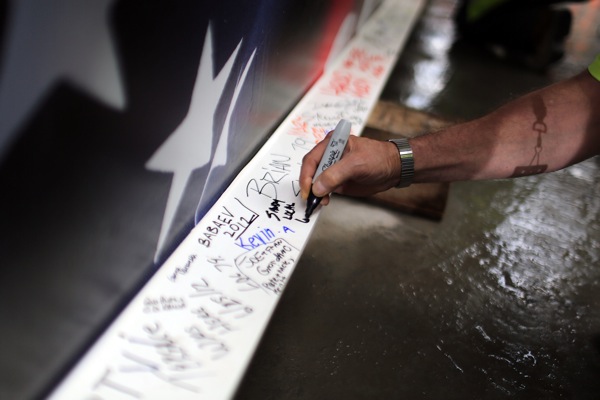 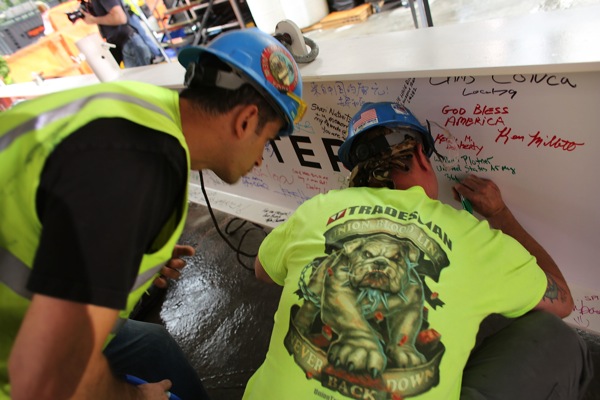 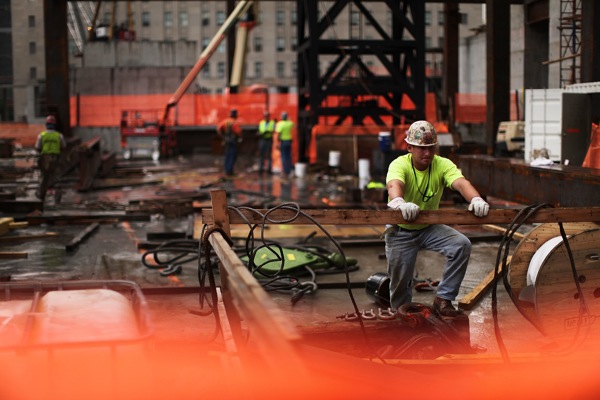 Even with the festivities, construction continued at 3 World Trade Center.
mchabanobserver 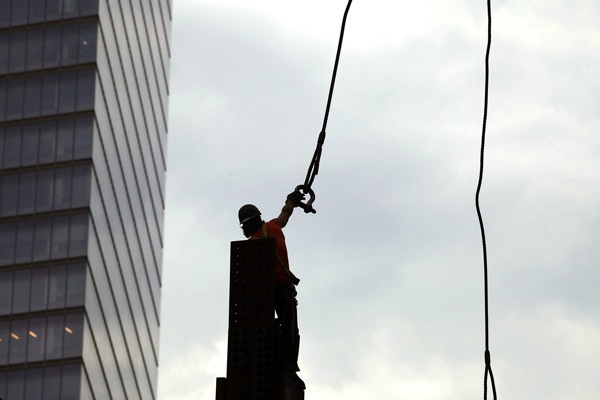 A worker at 3 World Trade works on a beam like the one about to be hoisted into place at 4 World Trade.
mchabanobserver
Advertisement 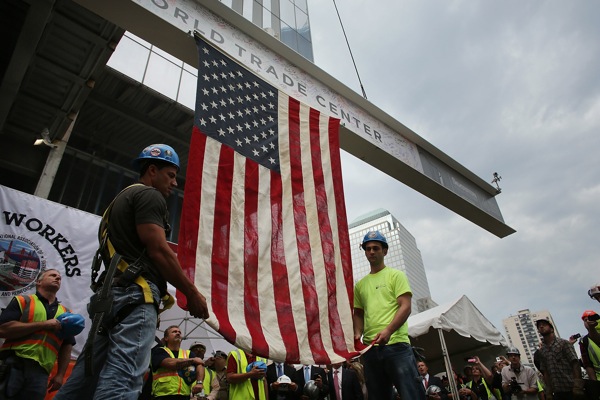 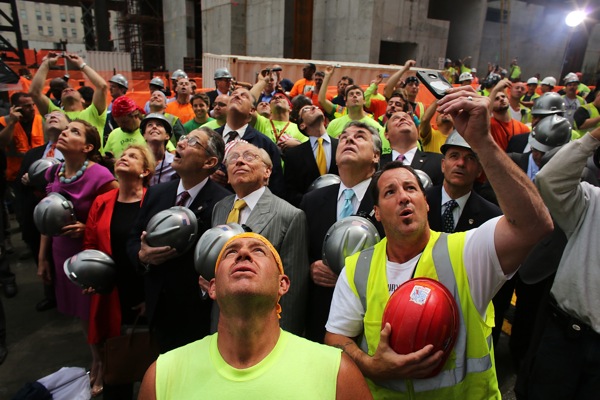 Look at her go.
mchabanobserver 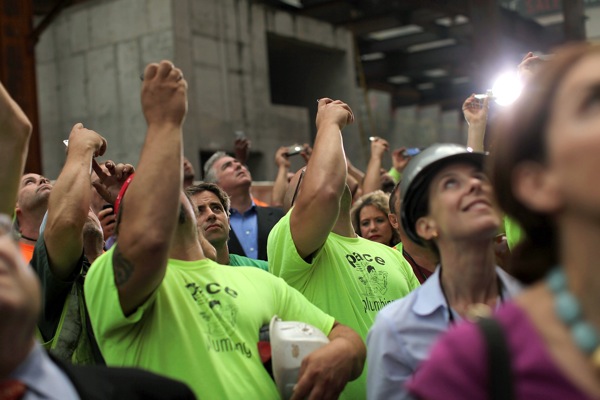 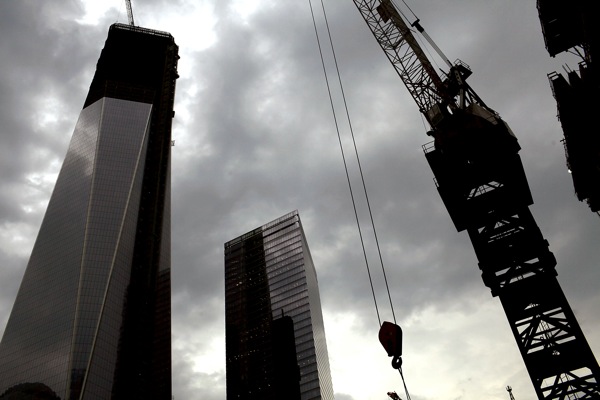 One and 7 World Trade pay their respects.
mchabanobserver 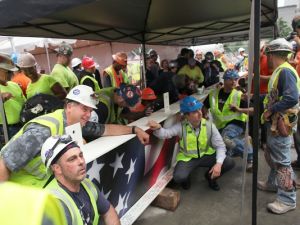 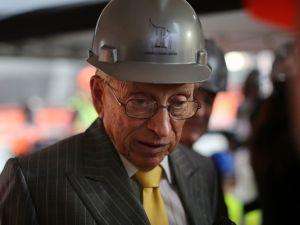 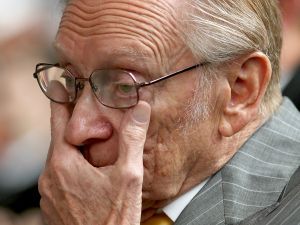 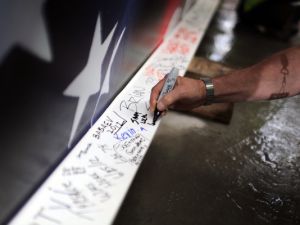 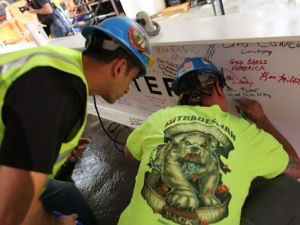 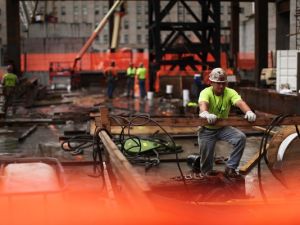 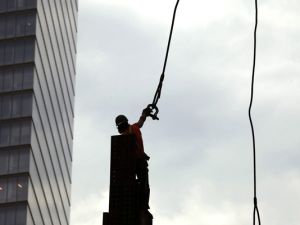 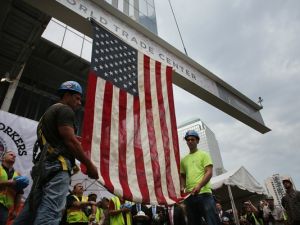 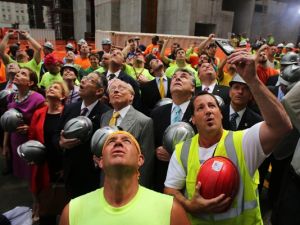 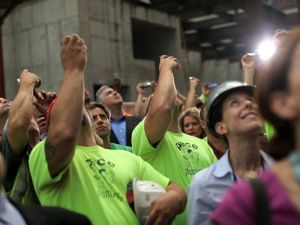 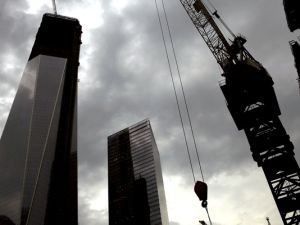 The thunderstorm had just cleared over Manhattan on Monday morning as the topping out of 4 World Trade Center was about to get underway. Turning down Maiden Lane from Broadway, the 977-foot tower, looming over the space of the small street, glistened even more than usual, freshly polished by the rain.Even against a backdrop of dark clouds, the building, designed by Japanese Pritzker Prize winner Fumihiko Maki, blends in with the sky in a soothing way that almost makes the 72-story structure disappear. It is much lighter—and, in the estimation of The Observer, quite a bit nicer—than its big brother, also rising, across the 16-acre site.

“Welcome to the first tower that will open for business here at the World Trade Center site,” Janno Lieber, right-hand man to Larry Silverstein at ground zero, boomed into a microphone from the podium. It was the only note of competition throughout the festivities, even though everyone knew the smaller tower, while started three years later, had beaten its sibling to the top by at least a few days.

To 1 World Trade Center’s credit, Barack Obama showed up two weeks ago, as did the mayor and governors Christie and Cuomo, all signing the ceremonial last column, still waiting somewhere to be hoisted into place. Four World Trade Center got state asssembly speaker and World Trade champion Shelly Silver, though he spoke from the heart.

“Despite the weather, today the sun is shining on Downtown Manhattan,” he intoned. “Having grown up in Lower Manhattan, living here all my life, having witnessed the September 11 attacks from my home, and having been here for the past decade, rebuilding, it is hard to adequately put into words just how wonderful it is to see this magnificent building coming to completion. To think, such a beautiful structure now stands where once such shocking ugliness and terrible pain is breathtaking and incredibly inspiring.”

As he spoke, iron workers were clambering over 3 World Trade Center in the background, hoisting a structural steel column into place, not unlike the one that would soon make the long journey to the top of this tower. Even on the most celebratory of days, work never stops on the site, at least as long as Larry Silverstein still holds out hope of finding a tenant for the building. “Many years from now,” Speaker Silver continued, “when the work is completed, and historians begin writing the story of Lower Manhattan’s rebirth, the greatest comeback story ever to be told, the name Larry Silverstein will figure prominently among its pages.”

When he took the stage, following the long applause that filled the 50-foot-high lobby, Mr. Silverstein’s voice was halting at first, caught up in the emotion of the moment. “With all we’ve been through these many years, it’s impossible to make progress without friends, supporters, people who really believe in what you’re doing as much as you do,” he said, opening his arms to the crowd.

This building was for them, it was for downtown, but also the city and the world.

“In a little over a year, 4 World Trade Center will be the newest addition to our neighborhood,” Mr. Silverstein said. “When we open the doors, it will not just be for our tenants, but for all New Yorkers”

And it already is. One World Trade Center had the president’s column, signed by some of the most powerful men in the western world, but 4 World Trade Center had the people’s column, signed by everyone in attendance (the press included). It is a ritual, as one attendee pointed out, that dates back to the time of the Vikings: “There’s a whole Wikipedia page about it,” under “topping out.” There you will find that it comes from an “ancient Scandinavian religious practice of placing a tree on the top of a new building to appease the tree-dwelling spirits of their ancestors that had been displaced.”

Silverstein Properties had arranged for a barbecue for workers on the site that day, and already the grill was going when everyone shuffled outside and the final beam was hoisted into place. R&B impresario BeBe Winans sang a rendition of “God Bless America” that soared as high as the tower and as slow as the beam crawling up its side.

With that charcoal smoke wafting through the air, it could have been ten years ago, or a thousand. Hopefully the spirits and the ancestors were appeased.