Demonstrators protesting on the Supreme Court steps in advance of the decision on the healthcare law. (Photo: Getty)

A few minutes ago, the Supreme Court issued a 5-4 ruling authored by Chief Justice John Roberts upholding the most controversial portion of President Barack Obama’s healthcare law–an individual mandate requiring most Americans to purchase health insurance or face fines by 2014. The Patient Protection and Affordable Care Act, which was the president’s signature achievement and top priority in the first part of his term, was signed into law on March 2010. It was intended to provide coverage for 50 million uninsured Americans by allowing anyone under 26 to stay on their parents’ policy, forcing states to provide Medicaid to those under 65 whose incomes are up to 133 percent of the poverty level, barring insurance companies from denying coverage or charging premiums to people with pre-existing conditions and mandating most uninsured Americans purchase insurance or face fines by 2014.

The individual mandate has been the most controversial element of the law and led to 26 states challenging its constitutionality in the courts. Opponents argue the federal government cannot require to people to purchase insurance, while supporters say it is necessary regulation of commerce.

In advance of the ruling, Mitt Romney’s campaign spokeswoman Andrea Saul sent out a “campaign update” to reporters this morning summarizing the candidate’s position on the law.

“Today, the Supreme Court will decide whether Obamacare violates our Constitution. While we await the Court’s decision, one thing is clear: Obamacare is bad law, bad for businesses, and bad for our economy,” Ms. Saul wrote.

Ms. Saul reiterated Mr. Romney’s view the law, which was President Obama’s top priority and signature achievement during the first part of his term, is “partisan, job-killing” legislation. She also repeated Mr. Romney’s campaign promise to immediately repeal the law if he is elected.

“On Day One, Gov. Romney will take immediate action to repeal and replace Obamacare with a plan that empowers individuals and frees job creators from the burdens this President has imposed on them,” Ms. Saul wrote. “Gov. Romney will pursue reforms that emphasize market competition and patient choice, that provide safeguards for those with preexisting conditions and chronic diseases, and that give states the flexibility to pursue innovative solutions for their own citizens.”

Though this was most certainly not a defeat for the president, political watchers have speculated this was a win win situation for Mr. Romney. If the law was defeated by the Court it would have been a failure for one of the president’s signature policy initiatives, however the law being upheld allows Mr. Romney to continue to fire up conservatives by pushing his  promise to repeal the law. 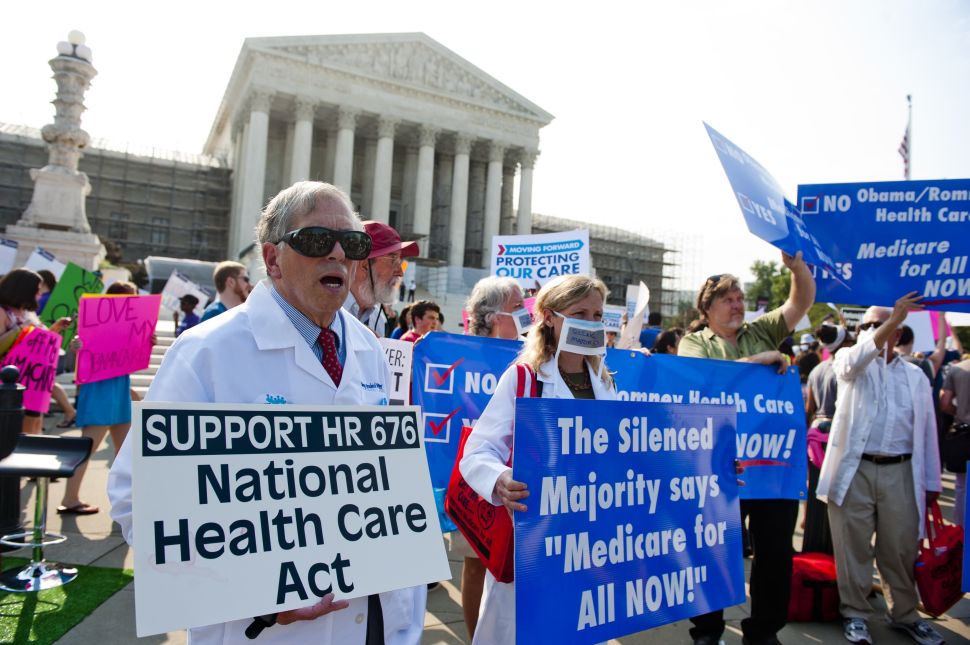