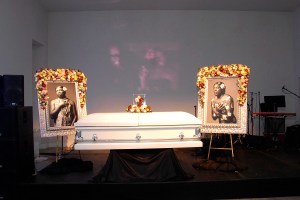 Starting around 2003, the artist Kalup Linzy introduced a character named Taiwan into his repertoire, a singer who was part diva, part soap opera stock character, and pretty much completely a bummer. Everything Taiwan did was emotional and dramatic. (sample lyric, from her signature song “Ass Hole”: “Ass hole, ass hole, ass hole/why oh why oh why?”) Mr. Linzy played the character himself, dressed in drag with a flapper wig, a flower in his hair and usually some kind of low-cut dress.

Last night, at the Whitney Art Party, Mr. Linzy laid his most famous character to rest in a performance called “Memorial for Taiwan.” There was a white coffin set up on stage and surrounding it were two large black-and-white photographs of Taiwan, adorned with flowers and looking like the exact kind of eulogizing portrait one finds at a funeral (Taiwan with her hands over her heart, Taiwan looking contemplatively in the distance). Videos Mr. Linzy had made as Taiwan were projected on the back wall in slow motion with the colors slightly off so they looked like old home movies or those death montages at the Academy Awards. Mr. Linzy stood in front of a six-piece band in a black suit with the pants tucked into gaudy gator boots, wearing a Rick James wig. This was his new character, Kaye, the master of ceremonies and inheritor of Taiwan’s mantle.

“Thank ya’ll for coming out this evening,” Mr. Linzy said. “Tonight, I’m performing as Kaye, but tonight is about Taiwan. This is a take on an Otis Redding song. It’s called ‘Edge of My Couch.'”

The band started playing to the tune of Redding’s “Sitting on the Dock on the Bay.” The new lyrics went, “Sitting on the Edge of My Couch/sitting ’til the evening comes.” On the back wall, the videos cut out and a message was projected: “RIP Taiwan Brassel. We love you…We will miss you.”

Taiwan became a strangely in-demand fixture in New York’s art scene long before last night’s wake. Mr. Linzy first came up with the character for his thesis in graduate school at the University of South Florida, All My Churen, a twisted drag queen revision of soap opera story arcs.

“He was just in this family of characters,” Mr. Linzy said about Taiwan on the phone the week before his performance. “He was kind of lighter in the early days. A lot of the songs were comic relief. When I moved to New York, Taiwan went to an emotional place. I was dealing with my own transition from a small town to a city. In New York, you can be around people all the time, but there’s still a lonely aspect to it.”

Taiwan started to slowly make appearances in New York, but it wasn’t until a performance at Art Basel Miami Beach in 2009, at a party for Klaus Biesenbach, the director of MoMA P.S.1, that Mr. Linzy found himself the subject of much attention. James Franco was at that party, and the two began performing together–Mr. Linzy took on the role of Taiwan, Mr. Franco as Taiwan’s unrequited love. Mr. Linzy eventually joined Mr. Franco on his truly bizarre stint on General Hospital, introducing the artist to a much larger–and decidedly different–audience than the one that goes to art fair after-parties for museum directors.

“It’s been like nine years since the first video with Taiwan,” Mr. Linzy said. “Soap operas, they do different story lines. Characters run their course or need a break. I think I was just kind of tired and weighed down. The character was in demand, but there’s only so far I can take him. I feel like he was getting attention where he could have become a superstar, but that wasn’t the character. He’s supposed to be a bluesy soul singer struggling in a relationship.”

So Mr. Linzy decided to basically start over. He left his gallery, Taxter & Spengemann, in 2011, just before it closed for good, and retired Taiwan, just as he teetered on the edge of fame.

At the end of his set at Taiwan’s memorial, Mr. Linzy opened the casket.

“I ask each and every one of you to come up and take a flower of your choice,” he said. The crowd rushed up to the coffin. Inside, it was filled with tiny gelatin molds shaped like flowers. It was the evening’s dessert course. As everyone ate, Mr. Linzy sang a song by another fallen diva: it was Donna Summer’s “Heaven Knows.”

“Heaven knows I never want to leave you,” he sang, and Taiwan’s portraits looked on.