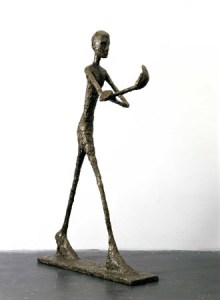 Valentin Carron has been selected to represent Switzerland at the 2013 Venice Biennale, we were just alerted via Artnet. Mr. Carron, who has emerged in recent years as one of the most compelling of the younger-generation Swiss artists, paints, sculpts and creates installations that question the central traditions of contemporary art through appropriation and reproduction. Right, he copies, sort of.

He might reproduce a cross in coarse polyester resin, create replicas of historical cannons in cheap material or create a work that embodies the formal qualities that we’ve come to identify with another artist. For example, his 2006 sculpture L’homme, uses the expressive elements of the work of Alberto Giacometti, elements which have by now, through endless replication, been robbed of their potency.

His works have also questioned the authenticity of the Alpine aesthetic, the sentimental style of “Heidiland,” as he calls it. For a recent show at 303 Gallery in New York, he presented a five-foot stone cube made of polystyrene and a two-headed snake sculpture as part of a show in which he referenced the “ancient elements of man’s nature, physical and physiological.” That show, which closed in May, was called “The dirty grey cube (you) turns around sadly and screams at us (he) ‘ca-tarac-ta.'” We’re looking forward to his hijinks at the Bienniale.