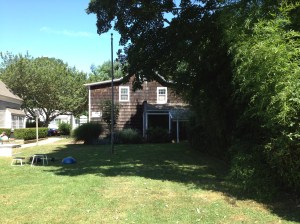 The future home of Karma in Amagansett. (Photo by Charlotte Lindemann)

Brendan Dugan, the enterprising proprietor of Karma bookstore, that West Village purveyor of artist books, and site of exhibitions and the odd performance (the artist Rob Pruitt signed books in the nude back in March) will open a second store later this summer in Amagansett, N.Y. The Hamptons shop, also to be called Karma, will be located at 249 Main Street, in a two-story shingled house set far back at the end of a narrow lot. Karma will occupy the building’s ground floor and, as with its New York home, will combine gallery space with a bookstore offering new, vintage and rare books.

Anyone who’s been there knows that not a single square foot of space goes unused at Karma. The new location has a spacious front yard, which Mr. Dugan told Gallerist he plans to turn into a sculpture garden. First up at the Amagansett store is a show by Dan Colen that opens Aug. 4, with three new flower paintings in the small interior gallery space and several outdoor sculptures, “large boulders turned into painted M&Ms,” as Mr. Dugan put it. Following Mr. Colen’s exhibition, Karma will show Piotr Uklanski, opening Sept. 1.

In his West Village store, which opened last year at 21 Downing Street, Mr. Dugan can often be found in the back office working closely (both figuratively and literally: it’s a small space) with artists like Nate Lowman, Adam McEwen, Richard Prince, Bjarne Melgaard and Mr. Pruitt. The store is also home to his publishing and art-direction outfit, An Art Service.

The idea for the expansion to Amagansett, Mr. Dugan explained, came out of a conversation with Mr. Colen. “Dan and I wanted to plan a show, but no one was in the city,” he said. He’s not the first dealer to notice the bounty of New York collectors who hightail it to the Hamptons in the summer, or the relative dearth of contemporary art galleries to serve them. In July alone, the area now plays host to three contemporary art fairs. And a handful of galleries have opened around town in recent years, like East Hampton’s Fireplace Project and Gallery Valentine, which, like Karma, both operate on project-space models.

Will the Amagansett space stay open through the winter? “I’m not sure yet,” Mr. Dugan said. “But we do have a fireplace.”