I’m planning a trip to my local nursery next week, just me and the nine sitting United States Supreme Court justices. It’s going to be a pain in the ass, frankly, because I have a smallish car, but Ginsburg can sit on Kagan’s lap, Sotomayor can sit on Roberts’s lap, and Thomas will ride shotgun where I can keep an eye on him. Otherwise, he’ll plow through the Doritos before we’re even out of the driveway. If they’re good, we’ll hit Five Guys on the way back—if they’re good. Still, despite the hassle, I think it will be worth it, because the nursery is a wonderful place to teach the judges about the reality of life on earth.

Outside, of course, are the plants, all happy and bright and alive. “Blooms all summer!” cheers one plant card. “Endless color!” proclaims another. “Deer-resistant!” adds a third.

Inside, though, is harsh, bitter reality. Nothing is deer-resistant. The place is filled with bug repellents, deer repellents, snake repellents, weed killers, insect killers, mole killers, ant killers. This is, of course, as it should be, because nature is ugly; there are no greater cynics than successful gardeners.

“Tree of Knowledge?” he said. “I don’t think so. You’re not even handling ignorance all that well. You know what? Just…just go. Leave.” It was, after all, mankind that led to God’s famous declaration about the world he had created: Behold, it was good.

“Nice planet,” sayeth the Lord. “Shame about the people.”

I thought of this when the Supreme Court determined, in its infamous Citizens United ruling, that unlimited money will not lead to a “rise in corruption” in politics. And when it reiterated that belief not long ago in its ruling against Montana, I thought, again, of God. I thought of him looking down at all he had created and thinking,

This is how little God thought of our better instincts: Exodus 20:13. “People, people: don’t kill. I shouldn’t even have to tell you that.”

But he did have to tell us that. Not just tell us—command us. God knew whom he was dealing with here. God was no fool.

“And don’t steal, for Christ’s sake,” he continued, “or fuck someone else’s spouse. What the hell is wrong with you, anyway?”

Running a close second to God in cynicism about mankind, it seems to me, were the founding fathers of our nation. That they felt compelled to write down that we are all created equal shows how little they expected us to arrive at that conclusion on our own.

“Right to life and liberty?” asked Jefferson. “Do we really have to include that?”

“Tom,” said Franklin. “Look around. Better also throw in pursuit of happiness; these idiots will probably forget that one too.”

They mistrusted the government, they doubted the courts, they kept a wary eye on the leaders. “Checks and balances” is 1787-speak for “cut the shit.”

All that cynicism led to a pretty good country.

But we seem now to be under the spell of optimism. If there are more guns, we say, there will be fewer shootings. If we let the market decide, we say, it will all work itself out. And, recently, unbelievably, we say that money won’t give rise to corruption.

In this critical responsibility, it seems to me, the Supreme Court has failed, and failed miserably.

As God, Ben and Thomas, I am certain, knew that they would.

And so off to the nursery I and the justices go. Alito will stay in the car and sulk that he couldn’t ride up front, and Breyer will head off to look at the fountains. Roberts, meanwhile, will run to the outdoor plants section, stop at the bright, colorful astilbes, lift one up, look at the card and call to me. 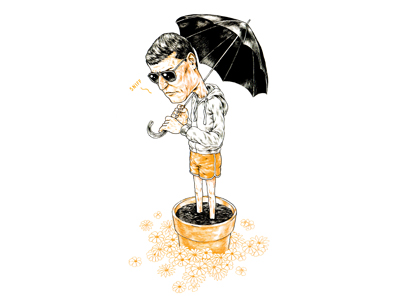