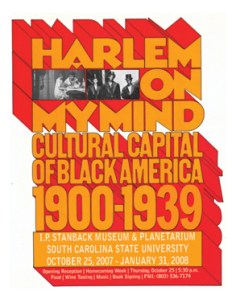 A poster for an exhibition about ‘Harlem on My Mind’ at South Carolina State University. (Courtesy SCSU)

Providing a happy reminder that good things can sometimes come out of bad exhibitions, Gwenda Blair has a nice profile in The New York Times today of Queens-raised artist Dawoud Bey, whose “Harlem USA” series is being shown at the Art Institute of Chicago this summer.

It turns out that Mr. Bey visited the Metropolitan Museum of Art’s notorious “Harlem on My Mind” exhibition in 1969, after hearing about the uproar it was causing, and it had quite an effect on him. Here’s Ms. Blair:

“To his disappointment, no protesters were outside the museum, which was under fire for excluding work by black artists in its portrayal of Harlem. But inside he saw something that left an indelible mark: walls plastered with blown-up photographs of ordinary black people that museumgoers seemed to find compelling enough to stand before and examine.

“Ten years later, having changed his name to Dawoud Bey and studied photography at the School of Visual Arts, he made his debut with a solo show at the Studio Museum in Harlem. Called “Harlem USA,” it consisted of 25 black-and-white photographs of neighborhood residents, like military veterans in a marching band and older women on their way to church.”

Mr. Bey was also the subject of a major retrospective at the Renaissance Society in Chicago this summer, which will travel. Here’s hoping it makes a stop in his hometown.