State Senator Adriano Espaillat officially moved on to a new race at a meeting of the Northern Manhattan Democrats for Change and the Friends of Adriano Espaillat in Fort George Presbyterian Church tonight, but he still had a lot to say about the close and controversial congressional campaign he just lost to longtime incumbent Charlie Rangel. Mr. Espaillat, who conceded to Mr. Rangel on Monday announced his intention to run for re-election to the State Senate, something he repeatedly said he didn’t plan to do “at this time” during his congressional race.

“The fire has not been put out. The hope you had has to persist,” Mr. Espaillat said in Spanish. “The unity has to always survive.”

Mr. Espaillat said he believed he and his supporters “came out stronger” from his unsuccessful attempt to unseat Mr. Rangel.

“You know, I’m still at fighting weight. It was just a couple weeks ago,” he said.

Mr. Espaillat also said he believed “Northern Manhattan came together” and began a “summer of unity” during his congressional campaign. He asked his supporters to build on that unity for his re-election bid.

“Let’s build that coalition that we know we’re able to build, where everybody comes and votes, a big tent approach to politics where the Asian, the black, the Latino, no matter wherever country they come from, the African American, the young, the senior, the man and the woman, everybody could be under that same tent,” said Mr. Espaillat. “Let’s not allow the treachery of politics to divide this community.”

Mr. Espaillat’s race pits him against another prominent leader in Upper Manhattan’s Dominican community, Assemblyman Guillermo Linares. Mr. Linares was initially expected to support Mr. Espaillat’s congressional campaign, but he switched to Mr. Rangel’s side in May. In exchange, Mr. Rangel and his allies have pledged to support Mr. Linares and the efforts of his daughter, Mayra Linares, in her effort to run for the Assembly seat he is vacating.

At the church tonight, Mr. Espaillat was joined by Mark Levine, a local district leader who was previously planning to make his own run at the State Senate seat if Mr. Espaillat was elected to Congress. Mr. Espaillat also received an endorsement from Manhattan Borough President Scott Stringer, who gave his support to Mr. Rangel in the congressional race. Afterwards, Mr. Stringer explained his reasons for backing Mr. Espaillat this time around.

“I think it’s a different race, a different set of circumstances. Sometimes you can choose between two very good candidates as was the case between Congressman Rangel and Senator Espaillat,” Mr. Stringer said. “But make no mistake, and I said it during the course of the congressional race, I believe very strongly that Adriano Espaillat has been a very effective State Senator representing a very diverse district and I think we need to send him back.”

“The Latino Justice group has asked the federal Department of Justice to step in and take a look at what occurred here with regards to language access. They are very concerned about the fact that hundreds of inspectors were switched, previous bilingual inspectors were switched to non bilingual personnel,” said Mr. Espaillat. “But, I leave that up to them, you know, we already crossed that bridge. I withdrew my lawsuit, you know, I’m asking voters to be confident in the electoral system. Whatever’s broken, w’ere going to fix.”

Earlier this evening, J.C. Polanco a Republican Board of Elections Commissioner for the Bronx wrote the Daily News saying he’d like Mr. Espaillat to apologize for the “tons of false, malicious and downright rotten allegations of voter suppression, fraud, and claims of sinister plots of collusion to hand a victory to Congressman Rangel” he made against the BOE. Mr. Polanco went as far as drafting a letter for Mr. Espaillat to sign thanking BOE staffers for their “hard work” and apologizing for accusing them of “terrible things.” The Politicker asked Mr. Espaillat his thoughts on Mr. Polanco’s letter.

“J.C. likes to go on NY1, you know, I’ve seen him. He’s a nice guy, I like J.C. but, you know, I will not apologize to a dysfunctional institution that has not completed their job the way they should have,” Mr. Espaillat said.

Mr. Espaillat also pointed to criticisms of the BOE made by others.

During his congressional race as he denied having plans to run for re-election if he lost, the Rangel campaign made repeated allegations Mr. Espaillat was circulating petitions for a potential State Senate campaign. At the time, Mr. Espaillat disavowed any knowledge of efforts to circulate petitions on his behalf and said, “Congressman Rangel whipped one out that looked like a fake subpoena.” The Politicker asked Mr. Espaillat how he was able to get the necessary petitions for his re-election bid if he wasn’t involved in collecting signatures during his congressional campaign. Mr. Espaillat answered by saying he only began circulating petitions after election day.

“If you go to the Board of Elections tomorrow, you will see that no signature was gathered for this campaign until after the 26th,” Mr. Espaillat said. “I project that we will submit tomorrow 5,000 signatures that were collected from the 27th forward.”

Mr. Espaillat isn’t just confident about the number of signatures he’s going to collect. He also predicted he will defeat Mr. Linares handily.

“I think that they’re going to re-elect me in a huge way,” Mr. Espaillat said. “I think this is going to be a huge landslide.” 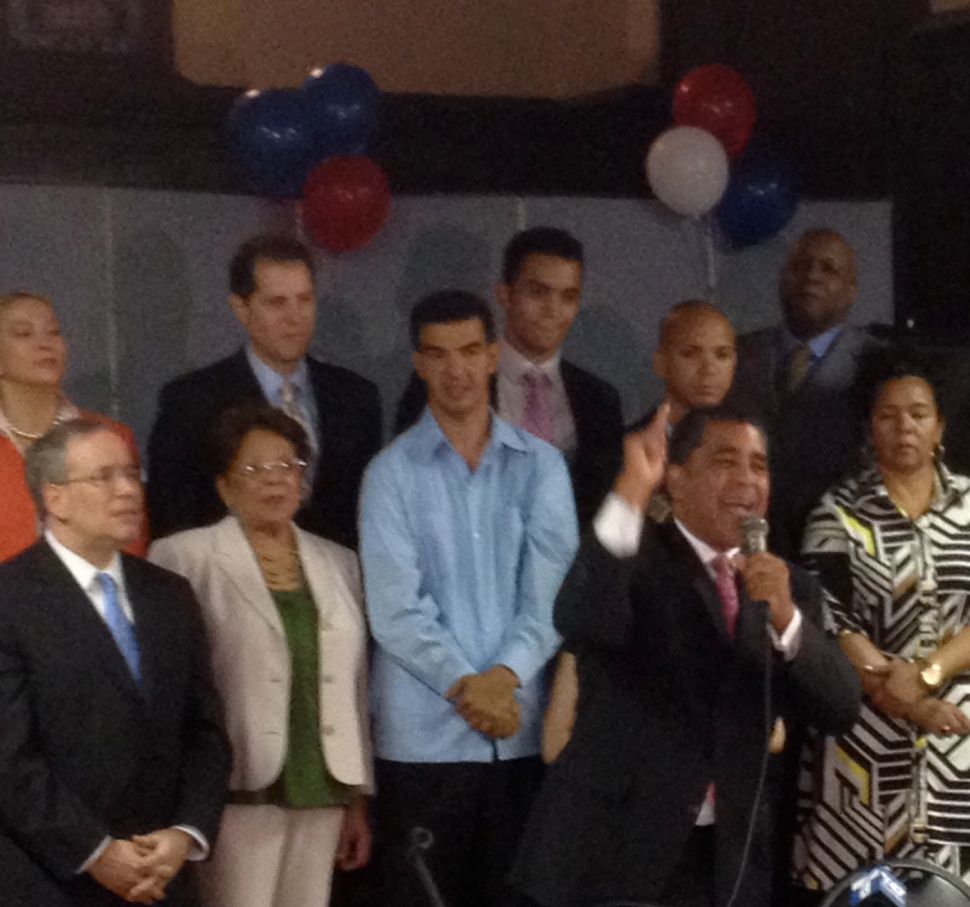