The organization is split up the middle and badly bruised as allies of state Sen. Bob Smith (D-17) on the one side and Woodbridge Mayor John McCormac continue cloak and dagger maneuvers  underground in the aftermath of Team Smith winning a chairman’s fight last year.

A party source told PolitickerNJ.com that he was irritated with Reiman’s decision to walk around Carteret with Kyrillos, a Republican U.S. Senate candidate.

Reiman’s allied with Smith, whose forces cried foul when Gov. Chris Christie showed up after the 2009 gubernatorial election to strut down Main Street in Woodbridge with McCormac as a politically crippled Gov. Jon Corzine went into seclusion.

Incoming Chairman Peter Barnes and Assemblyman John Wisniewski (D-19) seized on those images when they made the 2011 case for Barnes, branding McCormac a Christiecrat.

Now the McCormac forces fume about Reiman all but arm in arm with Kyrillos.

“The senator and I were talking and looking at waterfront redevelopment,” said the mayor, who recently held a fundrasier for Kyrillos’s opponent, U.S. Sen. Bob Menendez (D-NJ). “It had nothing to do with the campaign. This was not a political thing. We were talking to the senator about a piece of legislation. The senator didn’t say anything political in his speech.”

The picture was no longer on the campaign’s Facebook page this morning, and then went back up again this afternoon.

“I’m a Bob Menendez guy, have always been a Bob Menendez guy and I support his re-election campaign,” Reiman said. “The senator (Kyrillos) is an important player in Trenton with our waterfront development bill, which we’ve worked very hard on, with Assemblyman Craig Coughlin (D-19) and state Sen. Joe Vitale (D-19).” 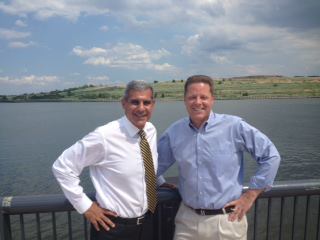