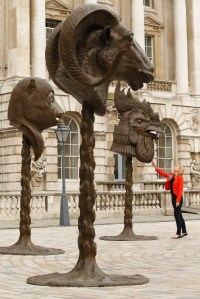 Ai Weiwei, ‘Circle Of Animals/Zodiac Heads’ at Somerset House in May, 2011 in London. (Courtesy Getty Images)

On the heels of the disappointing—albeit unsurprising—denial of artist and activist Ai Weiwei’s appeal against Beijing tax authorities, there arrives the comparably happy news that his monumental installation, Circle of Animals/Zodiac Heads, will be unveiled at Princeton University on Aug. 1, where it will have a year-long run. The exhibition is sponsored by the Princeton University Art Museum and the Woodrow Wilson School of Public and International Affairs, which has invited Mr. Ai to the school to participate in a series of events on Wednesday, Oct. 10.

The 12 sculptures will be given a noble home in Scudder Plaza, in front of Robertson Hall, the site of the Wilson School. It has previously been displayed in many cities across the world including Sao Paolo, London, Taipei and New York, where in May 2011, just two months into Mr. Ai’s detainment on tax evasion charges, it was installed at the Pulitzer Fountain across from the Plaza Hotel.

Each of the 12 bronze figures that make up Circle of Animals/Zodiac Heads represents a sign of the zodiac and is roughly four feet high—10 feet including its marble base—and weighs 1,000 pounds. The sculpture is a re-envisioning of a historical work that was commissioned by an emperor of the Qing dynasty, designed by Italian artist Giuseppe Castiglione in the mid-18th century and erected at an imperial retreat outside Beijing. These works were looted when France and Britain invaded China in 1860. Given their history, the works raise issues of repatriation, shared cultural heritage and democratization of public space, bread and butter themes for the Mr. Ai.

“We are delighted to have Ai Weiwei’s work on campus for the coming year, work that is at once playful and provocative, and through which we can consider the role of the visual arts in the politics of resistance,” said James Steward, director of the art museum, in a statement.

The sculptures are on loan to the Ivy League school by the family of an alumnus who has asked to remain anonymous. Given the Mr. Ai’s precarious status, it seems unlikely he’ll be free to travel to meet the invitation by Princeton. But here’s hoping.