Remember Ryan Holiday? He’s the longtime personal PR machine behind American Apparel (and Tucker Max!) whose tell-all book, Trust Me, I’m Lying: Confessions of a Media Manipulator, was bought by Penguin’s imprint Portfolio and came with its own outline for a media campaign that included “Fake Leaked Chapters.” (And it’s on sale as of today!)

We’re not sure if Mr. Holiday’s link-baiting piece on Forbes.com this morning counts as “leaked,” since he put his byline next to it, but it’s definitely designed to blow up the Internet, starting with its craftily designed title “Your Favorite Bloggers are Literally Crazy (And That’s Why They’re Popular).” Almost two hours after appearing, the post has now been deleted from Forbes’ website! How strange! Could this have anything to do with the multiple media outlets that were forced to “correct” articles relating to Mr. Holiday from yesterday’s PR blitzkrieg?

Taking aim and Jeff Jarvis, Matt Drudge, Penelope Trunk, and motivational blogger Sebastian Marshall, Mr. Holiday’s post reveals tantalizing factoids about his personal interactions with them, like the time he sat next to Mr. Jarvis at a tech conference and watched him like, totally not pay attention because he was too busy managing his Facebook account and Twitter before stepping up at the Q & A. (Okay, so it’s not that salicious, but still…Jeff Jarvis!) This is allegedly “adapted material” from the book…but then again, it could all be part of his master plan for us gullible media dupes, as his outline did state that his campaign would rely “on the fact that blogs and media outlets simply take for granted whatever is stated in a release.” It appears that Forbes.com might have been embarrassingly duped into letting Mr. Holiday get away with false information, as was The New York Times, CBS, and Today.

The question remains though: if Forbes.com had an article yesterday titled “How This Guy Lied His Way Into MSNBC, ABC News, The New York Times and More,” why would they put Mr. Holiday’s article up the next…only to immediately take it down? 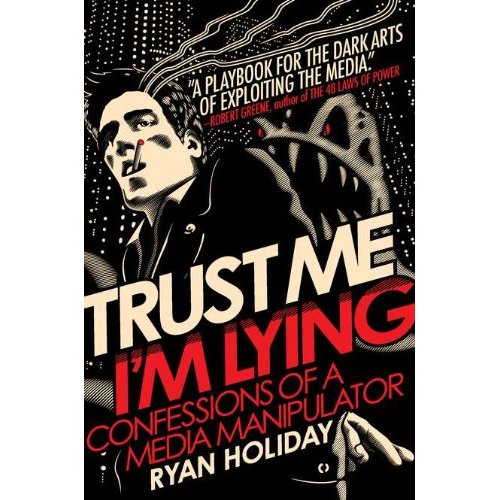