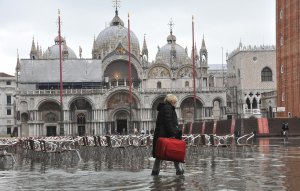 Anna Somers Cocks has just resigned from her position as chairman of the Venice in Peril Fund, a role she has held since 2000. The authorities, it seems, are not thinking long-term enough for Ms. Somers Cocks, who is troubled by the “deeply inefficient” and “highly politicized” decision-making process over at the fund. And she’s not the only one. Ms. Somers Cocks, who is also the chief executive of The Art Newspaper, which reported the story, is followed by four leading trustees, Lord Norwich, Nathalie Brooke, Sir Ronald Grierson and David Landau.

When it was founded in 1966, the Venice in Peril Fund focused on local issues like restoring artworks and the city’s ecological problems, pressing issues, to be sure. But since 2000, when Ms. Somers Cocks came on board, it has also turned its focus to “big policy issues” like funding a research project that brought together all the scientific studies on Venice’s flooding since 1966 to look closely at what rising levels are going to do long term to the city. The conclusion of that study was that the city needed mobile barriers. And while this solution may get us to the next Venice Biennale, according to Ms. Somers Cocks, it’s not going to be enough in the long run.

“The Intergovernmental Panel on Climate Change (IPCC) has agreed that the minimum rise in sea level by the end of the century will be 60cms, and it might be as much as a metre. There is a widespread and dangerous misconception that Mose, the mobile barriers currently being built, are a solution to the problem of rising levels and Venice. This is not the case, and what concerns me most is that the authorities are not thinking long-term and that the decision-making process is deeply inefficient and highly politicised. It need not be like this; the Dutch and the English have clear policies in place for at least 50 years into the future. It is terribly serious for Venice.”

What’s more, the fund plans to revert to its focus on restoration as it did in the pre-Somers Cocks days. Looks like the Venice in Peril Fund may need a ‘peril fund’ of its own.