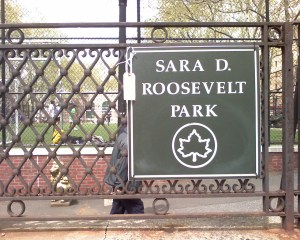 It’s looking like this rain is going to clear up by tomorrow. If it does, you may want to take a trip over to the Sara D. Roosevelt Park (which was named for FDR’s mother) for an action-packed block party hosted by the New Museum. (The party will be located in the park at Chrystie Street between Delancey and Broome Street, according to the museum.)

There will be performances throughout the afternoon—including one by High Priest of the hip-hop group Anti-Pop Consortium, at 4 p.m.—and a variety of art activities, like the chance to make “your own optical illusions with handmade tops and layered drawings,” inspired by the museum’s freshly opened “Ghosts in the Machine” show. The full schedule of events is here.

Anti-Pop is really making waves in the the contemporary art world of late. They’ll play the New Museum on July 27 as part of the museum’s “Get Weird” series, and they’ve been asked to make the soundtrack for a film by French wunderkind Loris Gréaud, who’s also collaborated with Lee Ranaldo of Sonic Youth. (Mr. Ranaldo, for his part, is playing in Hudson, N.Y., as part of NADA Hudson next weekend.)

Unlike those in Chelsea, many of the surrounding galleries on the Lower East Side stay open on Saturdays during the summer, so that’s a nice pre- or post-block party option. And the Essex Street gallery, at 114 Eldridge Street, will open a show of work by Charlotte Prodger and Jason Loebs from 6 to 8 p.m.

Should be a really nice Saturday!