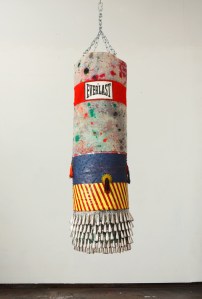 Mr. Gibson, a painter who uses a variety of materials as his canvas, received his master’s in painting at the Royal College of Art, London, after studying at the Art Institute of Chicago. He is half Cherokee and a member of the Mississippi Band of Choctaw Indians, which according to a gallery statement, has lead Mr. Gibson to “effectively raise questions about the position of Native American culture in relation to broader national and international communities.”

His artworks are in the permanent collections at the Museum of Fine Arts, Boston, the Smithsonian’s National Museum of the American Indian and the Denver Art Museum. He has had solo shows in New York at American Contemporary and Participant Inc, and is the subject of two forthcoming solo exhibitions, one at the National Academy Museum in New York and another at the Rollins Museum in Florida.