For those of us living in the outer boroughs, navigating Manhattan during the holidays can serve as a great reminder as to why we migrated off the island in the first place.  New Years Eve, St. Patrick’s Day, Halloween, Thanksgiving…the term “amateur hour” was practically invented to describe the hoards of revelers who descend upon NYC like a plague of locusts to “celebrate” these annual events by getting as drunk as humanly possible and clogging up the sidewalks and public transit systems.

Now, most of the time, this does not pose too much of a problem for Brooklynites and Queens residents, who would just as soon stay in their district anyway, throwing  Skrillex-themed rooftop parties.

But the 4th of July poses an issue for non-Gotham-dwellers: since 2009, the incredible light show thrown by Macy’s has been held on the Hudson River, making it almost impossible to view from the top of a Brooklyn Heights townhouse.

In late June,  the discontent of outer-borough residents were voiced  in a public press conference, where Public Advocate Bill de Blasio (D-Brooklyn) and Senator Daniel Squadron (D-Brooklyn Heights) railed against the dearth of explosives on the East River; a supposedly “one-year hiatus on the Hudson (that) has now become the new norm.” From 1976 to 2008, the East River held the event, and it was originally  moved to the Hudson to commemorate the 400th anniversary of Henry Hudson in 2009. But the fireworks were never moved back to their original location.

Councilman Stephen Levin and Brooklyn Borough President Marty Markowitz also stood behind the decision to bring back the sparklers, standing behind a petition  that has amassed 3,100 names so far.

Message received: Macy’s has agreed to a sit down with the Brooklyn  politicos to  discuss potential solutions, according to The New York Daily News.

The department store is being tight-lipped on the subject, with a spokesperson only saying, “Macy’s fireworks will take place in and around all accessible New York City waterways and will not be a permanent fixture at any one location.”

Hey, we’re not unreasonable people: If New Jersey residents are unhappy to lose the view of the fireworks on the Hudson, we’d be more than happy to outsource the whole Thanksgiving Day parade to Newark. 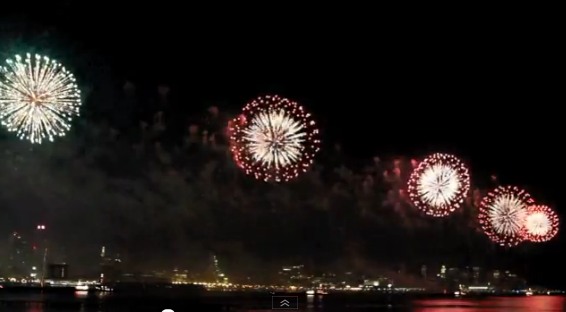