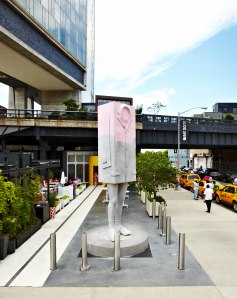 If you stumbled out of the Standard hotel last Sunday morning, blinking in the light like a newborn babe burdened with sin unoriginal, reeking of deeds, your hangover a telltale heart throbbing everywhere, a disproportionate outrage with yourself, growing, over how cliché it all was, I mean honest to God, it’s a cliché—you may have noticed that there’s a new statue out front!

That statue, Big Kastenmann by Erwin Wurm, went up this Saturday and consists of a block-like pedestal wearing a suit jacket, with legs that bring it to an intimidating 18 feet.

On the phone from Vienna a few weeks ago, the Austrian-born Mr. Wurm said that he saw the statue and the Standard as a perfect match.

“For me, the Standard is New York,” he said. “It’s a hip place there. When you do something for such a place, it’s not only for the hotel, but for New York, the place where the hotel is, and its people. And what I found interesting about the structure of Kastenmann [trans: box man] is that it’s a big block, you know, like most skyscrapers are big blocks.”

With its long body and two awkward legs, the statue doesn’t look so dissimilar to the Standard itself. It was one of two that Mr. Wurm offered the hotel, the second a hollow-suit statue that was rejected, perhaps due to its associations with discarded clothes.

Mr. Wurm went on to praise the Standard and specifically its Boom Boom Room. We asked what first came to mind when he thought of the Boom Boom Room, and he answered the question etymologically.

“‘Boom Boom’ comes from the music, it comes from many things,” Mr. Wurm said. “It also has a sex connotation, in a way. When you enter the Standard and you take the elevator, the video in the elevator,” by artist Marco Brambilla, “shows exactly what is happening. You take the elevator from Hell up to Heaven.” Then he chuckled knowingly, though it may have just been to fill a space in the conversation.

Mr. Wurm returns to New York this November, with a show at Lehmann Maupin.