TRENTON – Angela Donato admits she used to text and drive.  Not anymore.

That was the day her older sister, Toni Donato-Bolis, who was nine months pregnant, was struck and killed by an allegedly distracted driver.

The driver was not charged, but only received a $100 ticket, according to the Washington Township, Gloucester County resident.

“No texting message is worth this,’’ she said. “It’s not worth it to put a life at risk.”

The fact the driver was not jailed just exacerbates the suffering her family is going through, she explained. The suffering she said her family has endured should not have to be endured by others.

Toward that end today, Acting Gov. Kim Guadagno signed a bill that significantly changes the law for motorists who cause accidents while using their cell phones or who text.  A1074, titled the “Kulesh, Kubert and Bolis Law,” provides that the use of a cell phone during an accident gives rise to an inference of recklessness. That will help prosecutors in attempting to gain a conviction for vehicular homicide, upgrading the crime from a disorderly person’s offense. .

The bill, Guadagno said, allows prosecutors to add the element of recklessness to the charges.

The bill was borne out of, among other accidents, a horrendous accident involving husband-and-wife motorcyclists who were struck by a teen who was texting his girlfriend while driving. The couple, David and Linda Kubert of Dover, had their legs amputated, and now live in Florida, Guadagno said, in order to receive the care they need.

The bill “provides prosecutors with a means to more easily obtain convictions for vehicular homicide or assault by auto against a person who illegally uses a cell phone while driving and, as a result, kills or injures someone.”

Deaths caused by cars carry a five-to-10-year prison sentence and a maximum $150,000 penalty.

The bill had many co-sponsors, two of whom attended today’s bill signing.

Assemblywoman Annette Quijano, (D-20), Elizabeth, said this law makes people accountable for their actions, and she, Guadagno, and Assemblywoman Gabriela Mosquera, (D-4), Turnersville, thanked the families of the victims for sharing their stories.

“They made sure none of us forgot,” Quijano said of the families.

Helen Kulesh, 89, was killed in Elizabeth by a driver allegedly using a cell phone.

“If you wouldn’t drink and drive,’’ Guadagno said, “you shouldn’t text and drive.” 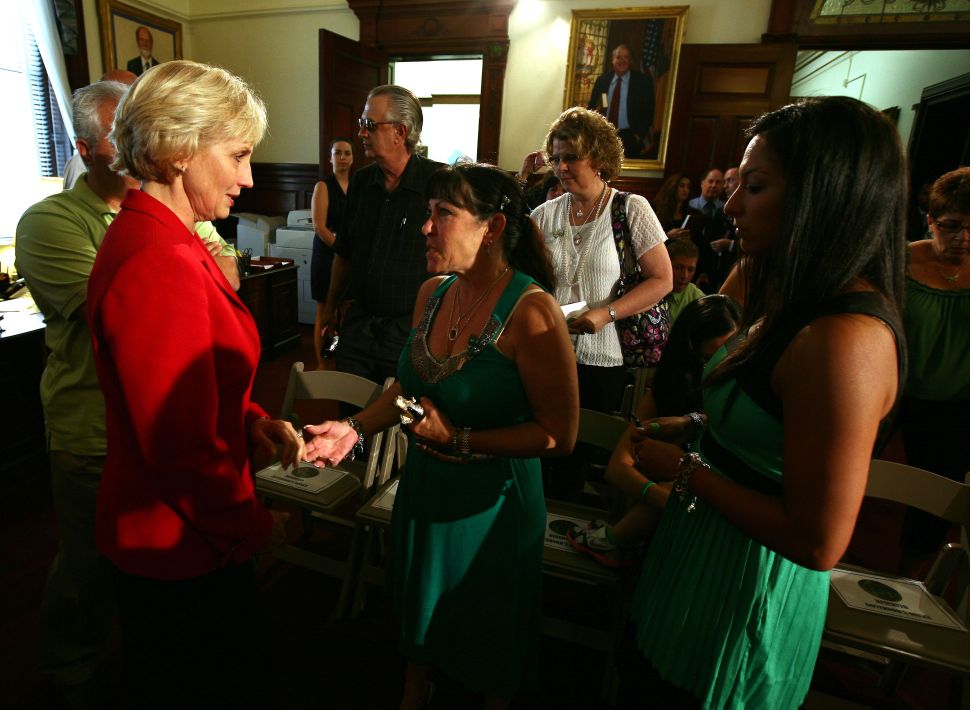