ENGLEWOOD – Standing outside his home here, Rabbi Shmuley Boteach called on U.S. Rep. Bill Pascrell (D-9) to publicly distance himself from one of Pascrell’s supporters, Imam Mohammed Qatanani, unless the imam himself repudiates past anti-Israeli statements.

“He’s one of the imam’s biggest supporters – arguably the biggest,” Boteach said of Pascrell.

The Republican candidate provided a stack of purported Qatanani quotes to the media from the imam, including the following: “Oh brothers and sisters. On such a day, a human disaster occurred: on 5 and ten, the 15th day of May 1948 was the greatest disaster which occurred on the face of the earth. It is what is known as the Palestinian Nakba. This Nakba, because of this Nakba, the State of Israel was established on the Land of Palestine.”

Boteach pointed out that Qatanani, a Paterson resident, faced possible deportation from the United States after he allegedly failed to disclose in a green card application that he was a past member of Hamas, a terrorist organization.

“Congressman Pascrell has sponsored legislation to recognize the goalie of the New Jersey Devils but has yet to condemn the slaughter of Israelis,” said Boteach on the day Israelis buried five victims from a terrorist bombing.

Boteach acknowledged his opponent’s seeming reluctance to engage punch for punch in the Democratic-leaning district.

He’s not happy about it.

“He’s guilty of the three C’s,” Boteach said of Pascrell. “Contempt, circumvension – going around the Democratic process by ignoring us – and cowardice.”

The Pascrell campaign released a statement.

“Congressman Pascrell represents one of the most diverse districts in the country and has a proven track record of fighting on behalf of all of his constituents, no matter their race or religion,” said spokesman Keith Furlong. “He continues to work to build bridges in both New Jersey and Washington, where he is focused on bringing Democrats and Republicans together to help middle class taxpayers, especially on building support for his Bring Jobs Home Act to insource jobs back to the United States.”

Pascrell is not the only elected official who has publicly recognized Qatanani.

Then-U.S. attorney Christopher Christie, speaking at an annual Ramadan break-fast dinner in Paterson the night before Judge Riefkohl announced his decision supporting the imam in his immigration case, praised the cleric.

“My view is he’s always had a very good relationship with us, and he’s a man of great goodwill,” said Christie, before embracing Qatanani and wishing him well.  In addition, Christie designated a top aide, then-Assistant U.S. Attorney Charles McKenna, to testify as a character witness for Qatanani. 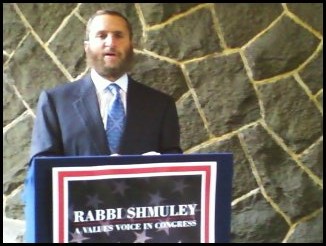