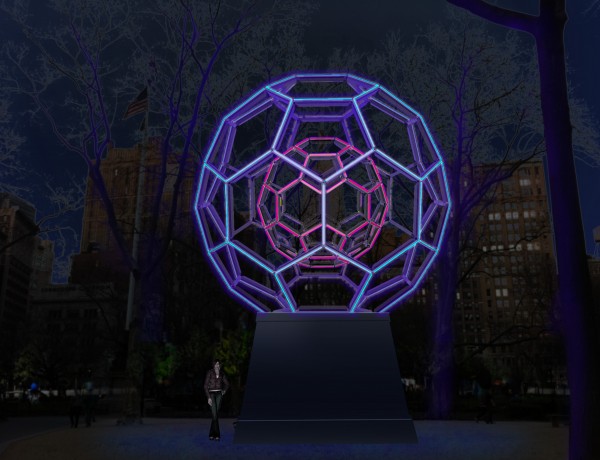 Rendering of ‘Buckyball.’ (Courtesy the artist and Gering & Lopez Gallery)

It’s not unusual for an artist to make good work in very different necks of the cultural landscape—hello, Julian Schnabel—but few do so in areas so mutually inclined to diss each other as Leo Villareal. A rangy New Yorker in his mid-40s whose primary art material is light, Mr. Villareal is on the one hand a well-regarded gallery artist, currently engaged on pieces for Madison Square Park, the Bleecker Street subway stop, the Johnson Museum at Cornell University, and—the whopper—a monumental piece to be installed upon a mile-and-a-half stretch of San Francisco’s Bay Bridge.

And his other discipline? Well, discipline may not be quite the right word here. Mr. Villareal is a longtime supporter of the Burning Man festival, the freewheeling blow-out dedicated to culture and extreme desert living that takes places annually in Nevada’s Black Rock Desert. He coordinates a New York camp, Disorient, in the settlement around the playa there. Burning Man, as few will need telling, is a festival of uninhibited self-expression, which is art-based, but viscerally populist, not to say rambunctious. And when Burners do contemplate the professional art world, which isn’t really that often, they tend either to dismiss it as elitist, careerist and ego-driven, or subject it to mocking parody along with the rest of the culture of marketing. And in late August, shortly after the ribbon is cut on his Bleecker Street subway installation, that’s where Mr. Villareal and Yvonne Force, his wife and the co-founder of the Art Production Fund, will be heading.

It would seem to reflect a radical split in sensibility but it’s more complex than that. The Bay Bridge project began when Ben Davis, who works with the bridge’s communications team, saw “Animating Light,” a survey of Mr. Villareal’s work, at the San Jose Museum and asked for ideas. The proposal the artist supplied—you can see it online at thebaylights.org—got him the gig. Twenty-five thousand LEDs, each of them adjustable in degrees of brightness, are to be mounted on the bridge’s suspender cables. “The sequencing is inspired by the systems found around the bridge, from weather to the movement of to traffic moving,” Mr. Villareal told The Observer. “So the piece itself becomes a mirror of the activity around it. “ 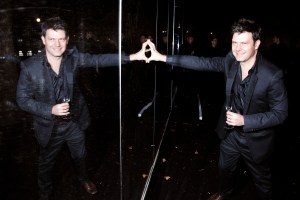 Installation, which is planned to begin this month, will keep a crew of 50 at work 524 feet above the from 11 p.m. to 5 a.m. for about six months. “Then there’s the weather, and the fog,” Mr. Villareal said. “We’ve had concern about the very harsh environment. But we have been reassured by Philips, who we are working with, that the equipment will perform.”

It’s a huge project, he said, and it will involve lane closures on the bridge and heavy equipment. “It’s not going to be easy. That is why our budget is what it is.”

What it is is $8 million dollars, mostly for the labor. But, to hear Mr. Villareal tell it, it will be well worth it for the city. Economic impact studies, he said, indicate it will bring in an additional $97 million worth of tourism and other money into the San Francisco economy. And the piece will be seen directly by some 50 million people.

As for his New York projects, Mr. Villareal was still putting the last touches to his Bleecker Street station piece when we spoke in mid-July. “The colors are still to be determined,” he said, adding that he would be heading over to the station later that day. He has been at work for a number of years on the piece, Hive, a hexagonal grid of LED tubes that is to be permanently installed on the station’s ceiling. Enter on the north side of Houston, at Mulberry Street and, he said enthusiastically, “you don’t even have to go into the station. It’s right next to the Uptown 6 train. They connected the Brooklyn lines with the 6.”

Come November, you’ll be able to take that N/R/Q train to Buckyball, the piece for Madison Square Park, which—to judge by the visualization—will be at once complex, simple and refulgent, the kind of math-based entity that once might have been bowled, lickety-split, toward Captain Kirk. ‘‘I’m working with two spheres,” he said, “so there are multiple scales, but there’ll be a dialogue. Until I get in front of the piece I won’t know what the exact sequencing will be.”

In terms of the tech, Mr. Villareal works at the cutting edge of his medium—this isn’t the fluorescent light tube minimalism of the 1960s. “The LED tubes we will be using have the ability to create 16 million colors,” he explained. “There’s a tremendous palette that’s possible. And each tube has pixels within it so it is pretty complex, what you can do with it. It’s certainly not the type of fluorescent tube that Dan Flavin was using.”

But how much of the sequencing will be predetermined?

“The way I work there’s a lot of chance in the initial programming,” he said. “I’m waiting for something compelling to happen. And then I capture that moment. And then there’s another full process of refinement and recombining. In the end there are set sequences that are displayed in a random order and for a random amount of time. I know that sounds a bit complicated but it’s not being generated in real time on the fly by the computer. It has all been done with me, selecting and making a lot of decisions. And then the sequences are played back. There’s no beginning, middle or end. It’s all randomized, so you don’t see the same thing repeating over and over. You might see the same sequences repeated, as fragments, but they are never in the same order. It’s constantly reshuffled.”

Rendering of ‘The Bay Lights.’ (Courtesy the artist and Gering & Lopez Gallery)

It’s crucial that Buckyball is named for Buckminster Fuller. “Bucky” Fuller is the late architect, designer and futurist who coined the phrase “Spaceship Earth,” built a Dymaxion House in Marshall Field’s Chicago department store and invented the Geodesic Dome, the shape of which Mr. Villareal references in his artwork. And that shape is one of the relatively rare occasions that the intuitions of a designer accurately predict the peer-group-tested discoveries of science.

“What’s exciting to me is that this form was found by some scientists at Rice University working with nano-technology,” he said. “They discovered it in the ’70s and decided to name it Fullerene. I’m sure Bucky knew at some level that this was occurring on a nano-scale but with research we have found that this truly is one of the building blocks, a common denominator. So that’s really exciting.”

Fuller was a mighty presence in the ’60s. John Brunner, the sci-fi novelist, covered Manhattan with a geodesic dome in Stand On Zanzibar,and the domes were recurrent apparitions at rock festivals. Fuller did not present himself as an artist, but one of his last recorded appearances was the delivery of a paean to Simon Rodia, the creator of Watts Towers, that Mona Lisa of Outsider art in Los Angeles.

Which brings us back to Burning Man, a culture within which Buckminster Fuller would have felt absolutely at home. That do-it-yourself, slapstick utopia was launched in 1986, when Larry Harvey, a landscaper with large but somewhat inchoate art ambitions, got a bunch of his buddies together to burn an eight-foot man constructed of lumber on Baker Beach in San Francisco. Rumor—and Burning Man is nothing if not a rumor incubator—says the flaming figure represented a man who had broken up a love affair, but Mr. Harvey has always been firm that he just wanted to celebrate the Summer Solstice.

Burning Man was instantly infused with the Situationist energies still thriving in the Bay Area and the festival became a hybrid of olde tyme hippiedom, neo-punk performance and whatever other random energies were throbbing in the social envelope. The mood was egalitarian and anti-judgmental. Anything that smacked of promotion was a no-no. (This Utopia has its informal controls. As a Burner myself, I would not recommend anybody try to break in without a ticket.) In due course the pressures of success—the festival now attracts upward of 50,000 annually—enforced a move from San Francisco to the Black Rock Desert, where it coexists, normally with mutual respect, with the local ranchers, who are largely of a Libertarian tendency.

But there have been changes, and this year’s event, which starts on Aug. 25 and runs until Sept. 2, will show just how sizable they are. Mr. Harvey and the other five founders, who are rumored to have been fending off predictable buyout offers from Silicon Valley ever since the dot-com bubble, recently turned Burning Man into an LLC and appointed themselves as its board. Last year the LLC began the process of transforming itself into a nonprofit, called the Burning Man Project, and it now finds itself dealing with celebrity, success—and ticket scalpers. Doubts have been expressed about the Man’s future, most prominently in a plangent leader in The New York Times.

Rendering of ‘The Bay Lights.’ (Courtesy the artist and Gering & Lopez Gallery)

But Mr. Villareal has no such fears. “The message is that Burning Man is not just about a week in the desert,” he said confidently. “It’s a much larger thing, a much bigger vision. And the idea is how can we bring what we’ve learned out on the playa out into the world.”

Which brings us to the art world. Professional artists and Burner-artists have always tended to be leery of each other. Mark Pauline’s Survival Research Laboratories, a performance art group much given to robotics and explosive devices—and you would have thought tailor-made for the playa—was formed in San Francisco, but the group has never attended Burning Man. And Burning Man artists, like Joe Rush, leader of those U.K.-based road warriors, the Mutoid Waste Company, is vociferous about not wanting to fit into the world of fine art.

In 2009 the artist Mike Kelley, who died earlier this year, attended Burning Man, together with the performance artist Michael Smith, who had himself filmed walking around among the celebrants, dressed as his alter ego, Baby Ikki. Later that year, the fruits of their collaboration, sculpture and installations by Kelley and Mr. Smith’s movie, were shown as “A Voyage of Growth and Discovery” at the Sculpture Center in Long Island City. According to Ken Johnson in The New York Times, the intention was “not to celebrate but to mock the Burning Man circus … they imply that Burning Man is naïve and disingenuously complicit with capitalist consumerism.”

Perhaps. Mike Kelley is no longer around to say yay or nay. But the art world—and art market—grows ever more absorbent. R. Crumb has long been absorbed. Street art, stickers, the Corey Helford Gallery in Culver City and Juxtapoz magazine are just some of the indications that what was formerly unacceptable can go down a treat.

Mr. Villareal isn’t too bothered about this process, either. “The lineage is getting blurred,” he says. “But I think Burning Man is always going to be a bit of an outsider. It has its own aesthetic.”