The 2013 Democratic Primary for governor has begun in Middlesex County, where state Sen. Barbara Buono (D-18) and Assemblyman John Wisniewski (D-19) battle for the early upper-hand.

Their fight unfolds with the mutual understanding that Gov. Chris Christie will be the target. Yet as much as Christie rankles both of them, there’s intra-party bad blood compounded here, where Wisniewski, state chair of the Democrats, infuriated Buono during last year’s redistricting process when he suggested meeting tie-breaking 11th member Alan Rosenthal’s demand for a more Latino-friendly district by severing Buono from her current moorings into a gladiatorial contest with state Sen. Joe Vitale (D-19).

Democrats ended up creating Rosenthal’s conditions in District 36, rather than force feed Buono and Vitale into a Democratic Primary. But Buono didn’t forget, and when Middlesex County Democratic Chairman Joe Spicuzzo imploded in an alleged money for jobs scandal last year, she surfaced on the opposing side of a chairman’s fight, staring at a team headed on the other side by Wisniewski and state Sen. Bob Smith (D-17).

Backing former FBI man Peter Barnes,  presented by the party as a no-nonsense G-man in the wake of the Spicuzzo catastrophe, Wisniewski won the contest against Buono and her candidate, Kevin McCabe from labor.

He went to the front of the Pines Manor to claim the win.

Even then insiders saw the implications for a gubernatorial showdown between the two ambitious Middlesex Dems, and read Buono’s slip in Middlesex – and subsequent loss of her Senate majority leader’s position – as mounting evidence that she no longer had the Christmas party invitation affections of the powerful South Jersey Democratic Organization headed by boss George Norcross III.

Not that she wanted them anyway by that point.

Wisniewski, by contrast, continued in good standing with the Democrats’ most potent warlord, and talk circulated about how Wiz could emerge as the Democrats’ primary candidate not from South Jersey most likely to secure the backing of South Jersey.

Wiz buzz emanated most vociferously from the southern portion of the state.

One source told PolitickerNJ.com that the man from Middlesex plans to set up an exploratory committee following the November general election.

Of course, the possibility of Wisniewski following through would occur only if Newark Mayor Cory Booker (beloved by Norcross) and Senate President Steve Sweeney (D-3) decided not to run for governor, say sources.

The political logic runs as follows: no one thinks Gov. Chris Christie will be Romney’s running mate anymore, but if Romney wins and puts Christie in the cabinet – gives him a crack at attorney general, for example – then Booker and Sweeney would find a diner somewhere and work out who gets what: Sweeney governor and Booker senator runs the conventional party wisdom, or maybe the other way around. Maybe Booker digs in for governor and Sweeney gets the consolation prize.

In any event, if Christie stays and runs again, keeping his cross-the-aisle contacts Booker and Sweeney on the sidelines, then the Wisniewski-Buono collision course remains fully activated.

As the latest name in the political business to disappear from the Norcross power totem pole, Buono would have her own struggle on the anti-establishment end of the party apparatus in the event that Christie doesn’t run for re-election. Just as Christie’s absence would reconfigure the ground game for Norcross devotees within the party, so too would the Republican governor’s departure create renewed gutchecks among the Norcross antis and rejects.

Chief among these stands former Governor Richard J. Codey, a state senator who trampled his Republican opponent in last year’s general election after redistricting sent Codey tramping into Morris County, where he promptly wrapped his arms around Republican elected officials and took away any chance his Tea Party rival had of gaining traction.

Were Christie not to run, Codey might run, maybe depriving the lesser known Buono of that public worker portion of the party still irritated with Norcross/Essex County Executive Joe DiVincenzo land for getting behind the Sweeney/Christie public pension and benefits alterations. While Wisniewski has to consider the potential of Sweeney or Booker jumping in without Christie around, so must Buono entertain the specter of Codey, who’s still the wealthiest of all legislators with over $800,000 in the bank.

As a clear-cut early anti-establishment brand, who bucked pension and benefits reforms with her own well-attended town halls, Buono has the additional task over the next number of months of trying to win over Codey in the event that Christie runs and Codey doesn’t run. Particularly given his strong ties to several key Democratic Party chairs in the northern part of the state (Hudson’s Mark Smith, Bergen’s Lou Stellato and Passaic’s John Currie among them), Codey retains the power potential of being able to back his own candidate for governor bent on defeating the Norcross/Joe D.-supported candidate.

It’s not a given that his choice to face Christie would be Buono, and that complicates matters for Buono, who’s already in a very localized Middlesex mosh-up with Wisniewski.

The same sources don’t rule out that he eventually could back Buono.

But some among the Codey crowd continue to doubt whether Buono has killer instincts as a retail politician, and in light of U.S. Rep. Bill Pascrell’s (D-9) old-school aggressive efforts to win the 9th District Democratic Primary, nurse hopes that a classic room-worker would emerge to take on Wisniewski in the primary and Christie in the general.

These sources see Winsiewski as too weak to take it to Christie – not him personally. They question the machinery (ie. Norcross and Joe D.) that would be behind him, which has functioned well with Christie, whose bosses might be reluctant to engage in a frontal assault of the incumbent GOP governor.

They want a winner.

Buono and her allies will make the case that while she may not be Pascrell-like, at least stylewise, she will be able to provide the most significant contrast points to Christie.

For his part, Wisniewski, never the warmest and fuzziest brand name himself in the recent annals of party politics, according to party sources, must continue himself to keep watch on the establishment side. Sources say Assembly Majority Leader Lou Greenwald (D-6) continues to appear ready to lurch from his blocks with news that he intends to run for governor next year.

As leaders of a fractured Democratic caucus, Wisniewski and Greenwald are close politically, but stand in each other’s way. Their deal, similar to a poor man’s version of the Booker/Sweeney uber-conversation, would conceivably run somewhere along the lines of, “Okay, Lou, you can be speaker if I get governor,” with the ultimate imprimatur of Norcross and DiVincenzo on those designs. 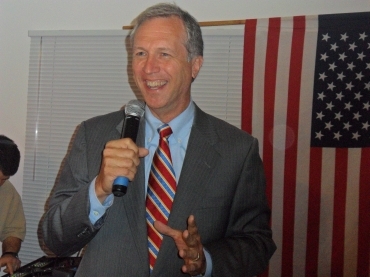