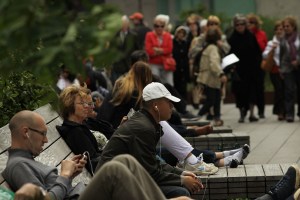 DNA Info reports that a handful of Chelsea activists have asked whether the $5 million allocated to the High Line in the city’s 2013 budget might be better spent elsewhere.

The High Line receives most of its funding from the wealthy donors to Friends of the High Line, though its $3 million annual operating costs pale in comparison to the estimated $90 million it needs to complete its third section, set to open next year. All the same, the article quotes sources saying that money could have built new parks and playgrounds in Chelsea. “It … makes you ask where our elected officials’ priorities are,” said one parks advocate.

In a statement High Line co-founder Joshua David said the organization still has “a long way to go” to raise the third section’s $90 million, and says the city’s help has been much appreciated.