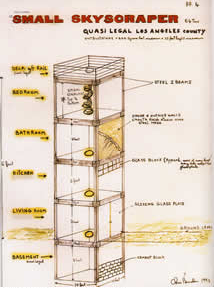 Next week, Chris Burden’s 2003 sculpture Small Skyscraper (Quasi Legal Skyscraper) will be installed in the courtyard at a shopping venue in Pasadena, Calif., The Art Newspaper reports. The artist first got the idea for the four-story aluminum and plywood “concept house” when he was building his own house in 1991 and asked the architect “what was the smallest building you could build without a permit.” At the time it was 400 square feet and 35 feet tall. Ten years later, TK Architecture’s Linda Taalman and Alan Koch reached out to Mr. Burden about the design, and the idea of actually building these sculptures began to take hold.

“When they approached me, I said I already knew what I wanted to do,” Burden says. The result was a lightweight, four-storey tower made of a pre-fab aluminium frame and floors of stacked two-by-four wood planks. “It was their idea to use unistrut tubing as the superstructure of the building.” Burden adds that at first, they considered developing it into an actual habitable structure, with sliding glass doors and a one-man elevator. “But I pulled back from that. I like it as more of a sculpture in the shape of a building,” he says. “It’s in that grey zone it; it could be a building, but when Mr Inspector comes knocking you say, ‘Well, that’s not a structure, it’s art.’”

The building has already been shown in the Messeplatz at Art Basel, but for that show he built another one rather than transport it. And there are plans to bring them both to New York. If he does, it will be a nice follow-up to his 2008 65-foot Erector-set sculpture in Rockefeller Center, What My Dad Gave Me. But this time, there will be two.