TRENTON – In an address before the joint gathering of the Legislature, Gov. Chris Christie, after conditionally vetoing a millionaire’s tax and slicing down the majority party’s submitted $31.7 billion budget, pleaded with the Democratic Legislature to sign a tax cut.

“I have used my veto authority on the budget you sent me to create a $650 million surplus,” the governor said. “Can’t we afford to send just one-third of that surplus back to our citizens and to give them that guarantee today?  I say yes.  We have the money available to fund a tax cut that gives relief to middle-class New Jerseyans.

Embracing the Senate tax plan supported by Senate President Steve Sweeney (D-3) and rejecting the Democrats’ millionaire’s tax, as he promised he would, Christie said he wanted to get this done before the end of today’s special session, but neither the Senate nor the Assembly had taken a quroum call.

“We know that we have the means after the years of shared sacrifice to give the people of New Jersey relief. They trusted us when we said this would be hard and that we needed them to step up and join us in the sacrifice. They did exactly that. And they trusted us again when we said — when we all said – that this year they would share in the benefit and see a tax cut.”

Republicans applauded the governor’s urging for immediate action, but as early as two hours before his address, Republican leaders grumbled about the fact that the Senate chamber was locked in an indication that Sweeney did not intend to receive the governor’s conditional veto and take any action this afternoon.

“The governor will chase the Democrats all summer, asking them to give the taxpayers back their money,” a source told PolitickerNJ.com.

Democrats pre-speech emerging from their caucus room yawned off the record at the governor’s imminent entreaty, calling the entire setup a “Tampa test drive,” less than two months prior to the Republican National Convention in Tampa, Fla.

“This was a speech for a national audience,” he said.

In his remarks, two days after calling a reporter an “idiot” at a seaside press conference, the governor shredded the media, arguing that often the best result in government evolves out of doing the opposite of what the pundits expect.

He also badmouthed Washington, D.C., where President Barack Obama stagnates with a Republican majority in the U.S. House of Representatives.

“It’s not a moment where we should take a cue from Washington, D.C., and begin emulating the politically shameful performances we see down there,” the Republican governor declared. “Washington, D.C., has been paralyzed because people talk at one another, not to one another. No one stops for a second to think about how what they fail to do today will lead to failure for our citizens tomorrow. Instead it’s a constant fight to see who wins the next 24-hour news cycle.  Is that really who we aspire to be here in New Jersey?”

He soaked up applause lines for his work in Trenton this cycle, highlighting accomplishments achieved with the Democratic Legislature, including teacher tenure reform, a controversial higher education restructuring, and mandatory drug rehabilitation for non-violent offenders.

“To show you my commitment to compromise, I have today conditionally vetoed a bill that would make New Jersey less competitive and have instead turned it into a law that would give middle-class New Jerseyans a tax cut,” the governor said. “And I did it today, not with my own proposal from January, but based upon a compromise plan presented by Senate Democrats.  One supported by Steve Sweeney and Jeff Van Drew.  One campaigned for by Loretta Weinberg.  Imagine that — a tax cut plan endorsed by Sweeney, Van Drew, Weinberg and me?” 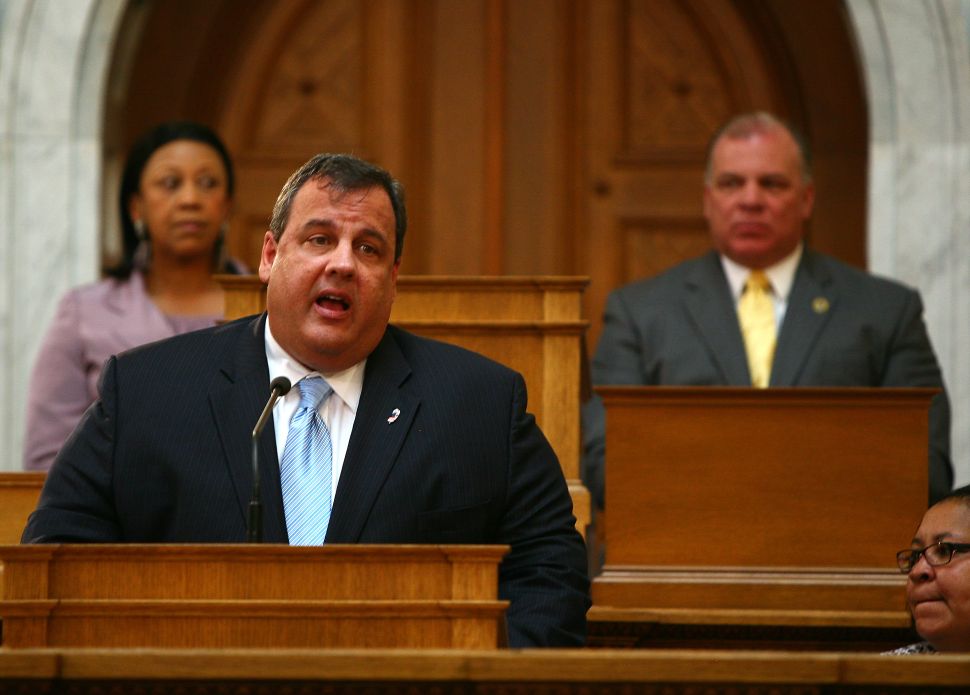