HACKENSACK – Newark Mayor Cory Booker told Northern Democrats last week that he wants to run for statewide office after he finishes his current term as mayor, according to a report in Patch.

Some people read into the mayor’s remarks his intent to run against Gov. Chris Christie, who’s up for re-election next year.

The Republican governor today said he didn’t read the story as a Booker formulation for 2013.

“Heaven forbid,” Christie mugged when a reporter asked him about potential opposition from Dem darling Booker.

“I read what he said,” said the governor. “He didn’t say he was going to run against me.”

For the record, Booker said he would consider running statewide – either for senator or governor – after his current term, which ends in 2014, after the 2013 gubernatorial election.

Christie consequently said he interpreted Booker’s remark as an aspiration aimed at the future, “someday,” not next year.

“We have a great working relationship,” Christie said. “I consider him a friend. I don’t lay awake thinking about that.”

He chalked up Booker’s local fiscal woes to a long history of mismanagement in Newark, refusing to throw a jab at the mayor.

“It goes back to before Mayor Booker was mayor,” said the governor.

He pointed out that the current City Council and the mayor don’t seem to be able to get along, and contrasted that city government’s antagonism with the Statehouse.

“The leaders of the council ought to get together with me and Senator Weinberg,” cracked the governor.

Condemned for once saying the press ought to take the “bat out” on Weinberg, Christie pounced.

“Don’t talk about hitting people, Loretta,” he said. “That can get you into trouble.” 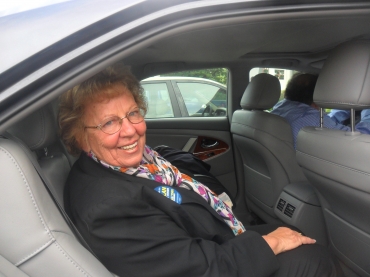