HACKENSACK – Gov. Chris Christie denounced as “anti New Jersey” a lawsuit filed by the New York Jets and the New York Giants against Triple 5, which wants to expand the so-called American Dream project in the Meadowlands.

The footbal teams sought an injunction in June to prevent the developer from kickstarting development.

Christie said the teams benefited from a “sweetheart deal” afforded them by then-Gov. Richard J. Codey.

“Because they’ve taken this kind of aggressive action, thousands of people cannot get to work on that property,” said Christie, who expressed his disappointment at the ownership of the sports teams.

On another topic, two weeks after the movie theater massacre in Aurora, Colo., Christie reiterated his position that New Jersey does not need more gun laws.

Terry Dopp of Bloomberg asked the governor specifically for his views on new laws to limit the sale on ammunition online.

Christie said New Jersey already has significant gun laws and he does not favor expanding them. He said he believes that states have the right to make their own gun laws.

“I don’t want the federal government making laws that would loosen or tighten our laws,” said the governor. “New Jersey should make its own gun laws.” 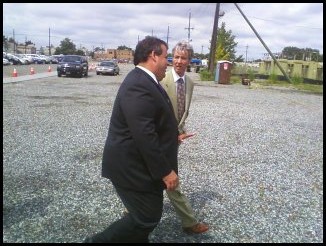