Update 2: Melanie Lemieux, is the owner of The Cash Bar. Read more below.

Crif Dogs is passe. The queue outside the empty gallery that serves as a front to Fig19 is a dead giveaway on the weekends. Both Milk and Honey and Little Branch have become way too high-profile. Employees Only should just rename itself to “Please Review Us On Yelp.”

Outed by Thrillist today, there’s not that much intel yet on The Cash Bar, a new Murray Hill secret locale located behind an out of service ATM. We do know they serve their cocktails in teapots, serve tapas, and have a plexiglass case with “a million dollars cash” in it.

The website for The Cash Bar is frustratingly sparse, but since the domain begins PartyRockNYC.com, (See: Update 2) a little sleuthing reveals that it belongs to the same organization that owns Billy Hurricane’s, Point Break, Thunder Jackson’s, Sweet Jane’s, and the “private party rooms” of Risky Business.

In terms of keeping a low profile, Party Rock NYC is doing a pretty good job of keeping their team as secret as their bars. Kyle Radzyminski is the owner of Billy Hurricane’s, and a stake in Thunder Jackson’s, but if he has partners, they are the silent variety.
We’ve emailed The Cash Bar to try to gather more information (like…do they take Visa?): stay tuned for a response!

Update: We just received an email containing a press release about The Cash Bar, which officially opens Thursday:

So, let’s get this straight… opening up is a bar daring a “hush-hush” secret ATM entrance, era-less presidential cocktails, $1,000,000 in cash on display, enticing tapas menu, accepting any currency from across the globe, with a low maximum capacity… and is in Murray Hill? Are you serious?!
Damn right…
Attention, Gamblers & Fancy Ladies, shhhhhh… and welcome to thecashbar – this neo-speakeasy is located in Murray Hill, a stones throw from The Empire State Building. Grasping Lower East Side charm, yet standing without all the pretentiousness that comes in tow… thecashbar is more of an accessible “blind tiger” in comparison to all other speakeasy style establishments in NYC. Yes, we agree that a mustache on a man is awesome & it is encouraged, but unlike others… it’s not mandatory folks.  Whilst calling on creative cocktails, boasting beautious bourbons, bestowing bottles of choice brews and accompanied by a tasty tapas menu; thecashbar has everything one would need for a fantastical evening out.  Opened by seasoned music industry veterans & bar’atuers from New York City to Montreal, Quebec… there is always an ecclectic mix of sounds to please a variety of ears, and a great selection of libations to tantalize the tongues of all.
How can one find this quaint little joint is a question you may be asking yourself.  Well, simply look up for the “$” sign on East 34th Street between Park & Madison and find the “Out of Order” ATM machine in the foyer of an unassuming sports bar. Yes, it will say “out of order”, but you should really look past that façade.Come on down celebrate the One Worldly Common Denominator… L’argent, Geld, Soldi, Dinero… Money.  thecashbar is the city’s biggest little bar.  Cha’Ching!

Update 2: The Observer received an email from Melanie Lemieux, owner of The Cash Bar, as well as a message from info@itsthecashbar.com:

-TheCashBar is NOT part of PartyRockNYC, nor affiliated with any other bars. Mentioning any other locations is completely out of line.
– Kyle Radzyminski is not involved with Thunder Jackson either, in any way.

The domain for the bar’s website has also changed to Itsthecashbar.com, no longer routing from PartyRockNYC.com. 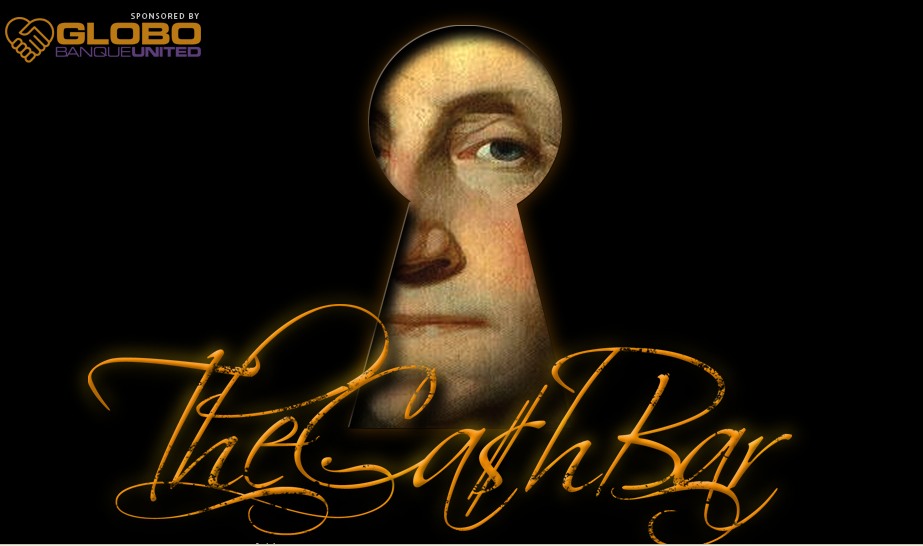