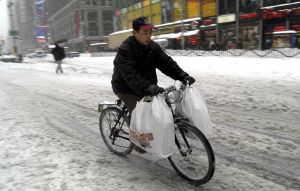 NEW YORK – FEBRUARY 17: A delivery man crosses a snow covered Times Square on his bicycle February 17, 2003 in New York City. Billed as the worst snowstorm in seven years, the New York area is expected to get 12 to 20 inches of snow before the storm ends. (Photo by Graham Morrison/Getty Images)