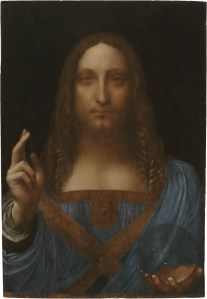 The painting. (Courtesy Art in America)

Art in America reports that the Dallas Museum of Art, headed by former Whitney Museum director Maxwell Anderson, is currently considering the purchase of a painting recently reattributed to Leonardo da Vinci, Christ as Salvator Mundi (c. 1499), valued at $200 million.

A spokeswoman for the museum confirmed that, “We have brought Leonardo da Vinci’s recently re-discovered masterpiece Salvator Mundi (Savior of the World) to the DMA. We are actively exploring the possibility of acquiring it.”

New York dealer Richard Feigen is quoted as having his doubts as to the value of such a purchase.

“To me it is not a gripping masterpiece,” he says. “For me Dallas would make a more serious splash by going after several lesser priced paintings in very fine condition. It would be cause for chatter in the museum world if Dallas bought eight or 10 really serious old master paintings, a field where they had not previously ventured.”