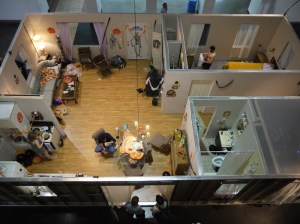 Still from Habit performance at Luminato, 2011.

Habit, an art installation/one-act play billed as “The Real World meets No Exit” by experimental director David Levine, will be coming to New York City in the fall. In past performances, Habit has been staged inside a “four-walled, fully furnished and functional American ranch house” where three actors perform a 90-minute play on a loop for eight hours everyday for 10 days. The actors eat when they are hungry, shower, go to the bathroom and basically live normally inside the house while reciting their lines. The audience looks in through windows set up around the house’s perimeter.

The project is an extension of Mr. Levine’s previous work, which includes sealing two actors in a black box and having them perform Broadway plays on a loop out of view from the audience, and sending a method actor to the German countryside to plant potatoes for 10 hours a day in character as a 1950s-era East German farmer.

“Actors are so awesome, but I got kind of tired of torturing them,” Mr. Levine said over the phone last week. “So the idea here was to create an experience that was much more enjoyable. They work for eight hours a day. They have a bathroom, they can cook whatever they want and they can watch TV.”

Habit, which is presented by PS 122 and the Crossing the Line Festival, will be installed inside the Essex Street Market. The piece runs Sept. 21-30, daily from 1 p.m. to 9 p.m. Mr. Levine is currently raising funds for the project through Kickstarter.

If his earlier work was a way of questioning the limits of method acting by stripping the performers of anything performative (e.g. the audience), Habit is more about highlighting the banalities of performance, the routine of saying the same lines over and over again. Mr. Levine said he thinks of the piece as something more like a piece of sculpture or a video loop playing inside a gallery. He was thinking about the line between art and theater and what level of spectacle is required to make a play qualify as endurance art. Habit seems to straddle this line, but never really falls on either side.

“We’re actually using two casts on alternating days,” he said. “I felt like if you lock someone in for 10 days straight they’ll do a different kind of performance that turns to confinement–or torture. This is less about endurance. Now it’s just a day job.”