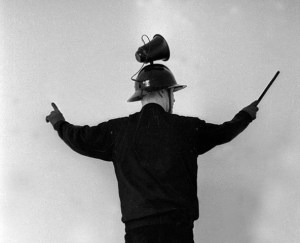 If you are in New York this weekend and find yourself craving a dose of experimental electronic music, Audio Visual Arts in the East Village has the solution: a nonstop marathon of the audio work of the late German artist and musician Conrad Schnitzler outside its storefront at 34 East 1st Street, just east of 2nd Avenue. “No content will be repeated,” the event’s announcement promises.

The audio will also stream live from www.CON-MYTHOLOGY.com so that audiences all over the world can tune-in. Additionally, a selection of vocal works by Schnitzler will be presented in the Silver Sound Box just west of the AVA storefront, where visitors can plug in their headphones to hear the audio. Finally, a video called MACHER featuring Schnitzler working in his studio, will be projected in the gallery space.

Schnitzler died in 2011 at the age of 74. Notoriously reclusive and inexhaustibly creative, he studied briefly with Joseph Beuys in the early 1960s before quitting art to focus on sound. (He famously left all of his sculptural work in a field.)

He was one of those rare and essential people in art who make things happen, and he helped to start bands, performance spaces and record labels. He also worked for a period as a sailor. Here’s writer Geeta Dayal on Schnitzler in Frieze in 2011:

During his days as a sailor in West Germany, Schnitzler listened to the radio at night, tuning into the likes of Stockhausen and Nono on Herbert Eimert’s pioneering Neue Musik broadcasts. He drew connections between the music he heard on the radio and the music of the ship engines. ‘He knew the sound of the ship’s engine so intimately, every creak and sound that the engine made,’ says [Ken] Montgomery. ‘He knew by listening what he had to do to fix it.

Mr. Montgomery, a sound artist, is helping to organize the marathon, which is part of “Con-Mythology,” a whole slate of Schnitzler activities in New York over the next week. More information on that here.

In other marathon-art news, this is the last weekend that Christian Marclay’s 24-hour work The Clock will screen through the night on Friday and Saturday at Lincoln Center.