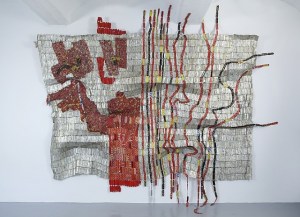 A shimmering tapestry of broken mirrors and pressed tin by Ghanaian artist El Anatsui is set to open at the High Line in October, Carol Vogel of The New York Times reports. This epic, site-specific piece, called Broken Bridge, will hang from an outdoor wall by the park between West 21st and 22nd Streets.

This will be the first outdoor installation in the U.S. by the sculptor, born in 1944 and known for taking to wood with chainsaws and torches to create his earlier sculpture. Of late, Mr. Anatsui has turned to making installations from shimmering found objects like liquor bottle caps and copper wire that resemble woven cloth.

“He hasn’t shown here much except in galleries,” said Cecilia Alemani, the curator and director of High Line Art. “We’re particularly excited because this piece is slightly different than others he has made in the past, since it includes mirrors that will reflect the surrounding landscape.”

With names like ‘Hesitant Rivers,’ and ‘Skyline,’ Mr. Anatsui’s reflective cloth-like structures seem like the perfect addition to the park nestled between the Hudson and the looming high-rises of Chelsea.