Ultimately, the group’s most effective recruitment technique has been providing its members a friendly community—sometimes very friendly—complete with those cuddle puddles. Indeed, for a movement focused on transcendence and the eventual shedding of our mortal “meatsacks,” futurists can be a kinky bunch. Particularly out in the Valley, where many futurists “co-house,” a sexualized aura prevails and many members practice polyamory, taking multiple sex partners.

After all, if the world is coming to an end, why not enjoy ourselves while we have the chance?

Indeed, while Mr. Yudkowsky isn’t quite a techno-utopian in the Kurzweilian vein, some of the lengthy discourses on the Less Wrong blog revolve around “fun theory,” or imagining what we would do if we were immortal.

While long-term thinking about the Singularity tends to be “very idealistic and smart and visionary,” according to William Eden, who helped found New York’s Less Wrong chapter, in the near-term, devotees are focused on maximizing the moment, “trying to make more money, have more sex, all of the very basic monkey drives.” Mr. Eden has since relocated to Palo Alto to work for Azumio, a developer of biofeedback health apps funded by Founders Fund, a venture capital firm founded by Mr. Thiel.

Like a number of key Singularity theorists, Mr. Eden also moonlights as a personal coach. He and his wife Divia recently released a series of videos and training sessions called Effectiveness for Geeks.

Eden is not his given last name. He and Divia, who was also part of the Less Wrong meetup group, made up a new one at their wedding this year, which was officiated by Mr. Yudkowsky. One source described the couple as the “JFK and Jackie O. of the Singularity,” though the comparison would be more apt if Camelot were a hippe commune on the Pacific Coast.

For a time, the Edens lived with Patri Friedman—the grandson of economist Milton Friedman and a friend of Mr. Thiel—and his wife in a co-housing situation that they dubbed Tortuga. (Mr. Thiel has also invested in the Seasteading Institute, Mr. Friedman’s attempt to erect a new kind of government atop a bunch of oil rigs in international waters.)

The foursome’s adventure was well documented on Shannon Friedman’s LiveJournal, although all have since have moved out. After her separation from Mr. Friedman last August, Shannon has been dating Mr. Yudkowsky, though not exclusively. “I am now down to only three boyfriends ;)” she wrote on her blog in March. “They’re all very casual. Adam describes my relationship with Eliezer as two eight-year-olds on a playground. We banter and play and hot tub.”

Not surprisingly, many futurists are also partial to mind-expanding substances. “If I cut down to once/week of pot smoking with possibly the occasional hallucinogen if I can get them working, then that’s only 1-2 nights of altered state/week,” Ms. Friedman wrote last year. On Twitter, Mr. Friedman, whose children were part of the Edens’ wedding party, has wondered if he was taking too much ProVigil, the anti-narcolepsy medication often used as an energy enhancement drug.

As Mr. Vassar explained, “They probably don’t have a relatively mainstream life because why would you, out here?”

Asked whether polyamory was part of the New York scene as well, Ms. Vance said it was uncommon. “I’d certainly say that we don’t think ‘poly’ is morally wrong or anything,” she noted, adding that the California contingent had taken the idea quite a bit further. “In one of those [co-]houses, I saw a big white board on the board with a ‘poly-graph,’ a big diagram of who was connected to whom,” she said. “It was a pretty big graph.

“I won’t claim that our exact culture is the best for everyone, because it’s not,” Ms. Vance went on, “but physical contact is something that I think an awful lot of people do need more of.”

That is, until we shed our physical bodies altogether!

“People being happy helps a community grow,” Mr. Yudkowsky said. “I don’t think I ever understood why it was that to save the world you needed people being happy around each other until I visited New York. Nobody wants to hang out with you if you’re not happy.”

A version of this story appeared on the cover of  July 25, 2012 issue of The New York Observer. 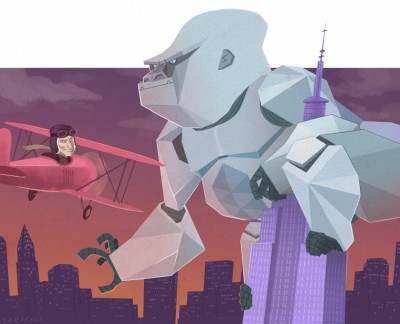