Federal agents have stormed Trenton City Hall as part of a probe of Mayor Tony Mack, two sources in the city told PolitickerNJ.com.

The raid comes a day after federal agents spent four hours in the mayor’s home and carried out four boxes.

A source told PolitickerNJ.com that many federal cars have surrounded city hall as agents pursue their investigations in the building.

Blue jacketed men with the letters “FBI”on their backs  could be seen entering the downtown edifice where one source speculated that the raid had started moments earlier.

A second source said a staff member from the mayor’s office could be seen pushing through an exit door as dozens of agents searched the building. 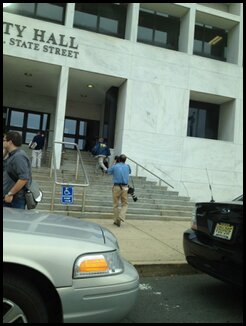