Is the viewership of the Fox News Network really so delicate that they must be shielded from an exclamatory remark invoking the name of a guy worshipped by a decent-sized slice of the human population?

And yet, Kelly felt the need to apologize for it, and on a subsequent viewing, the ‘bad words’ were censored:

News Corp’s other notoriously conservative news outfits don’t seem to shy away from it. Question: Does this say more about Ms. Kelly, the network’s viewership, or who someone with Fox News’ censor button answers to? 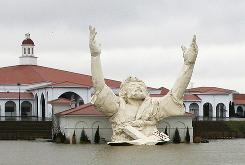