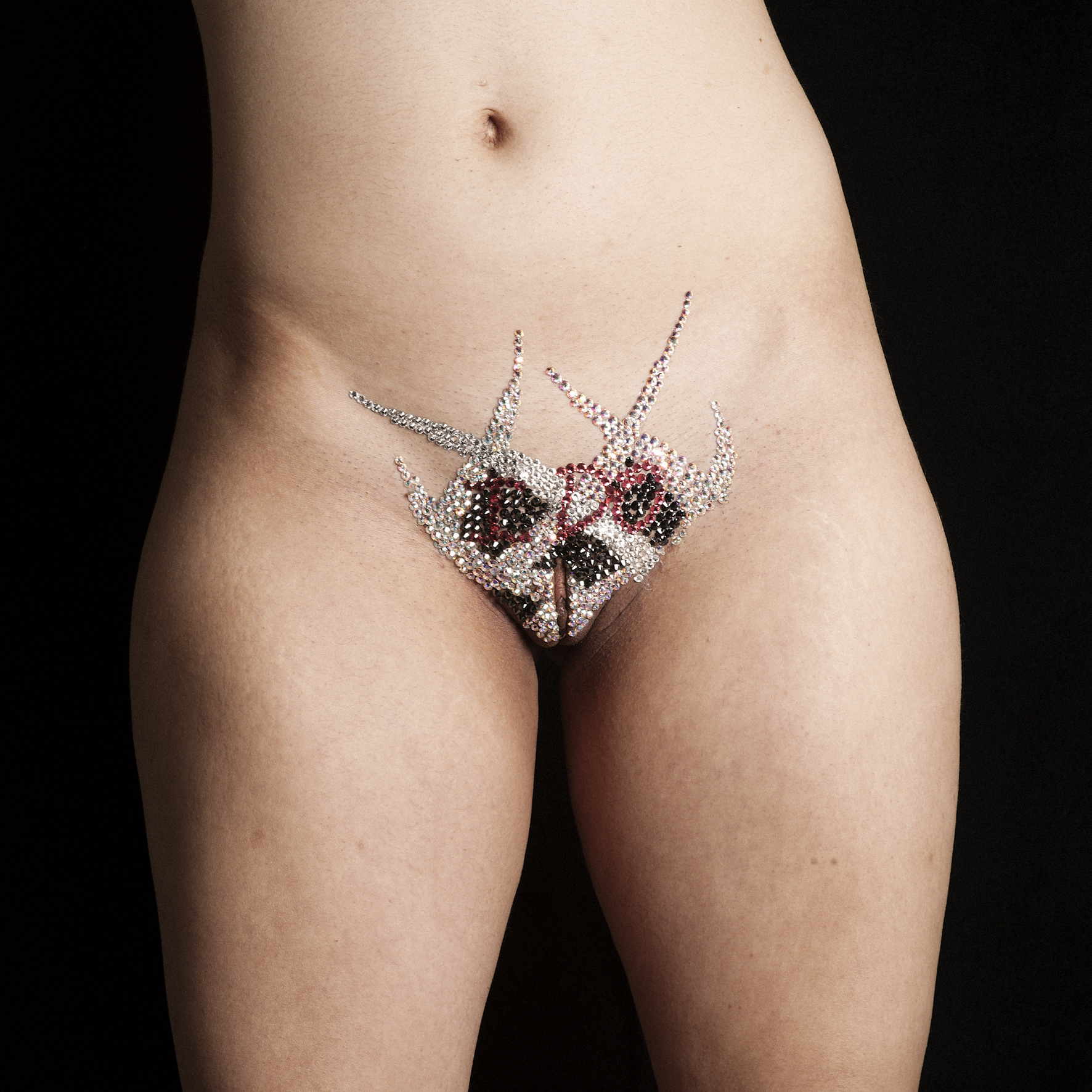 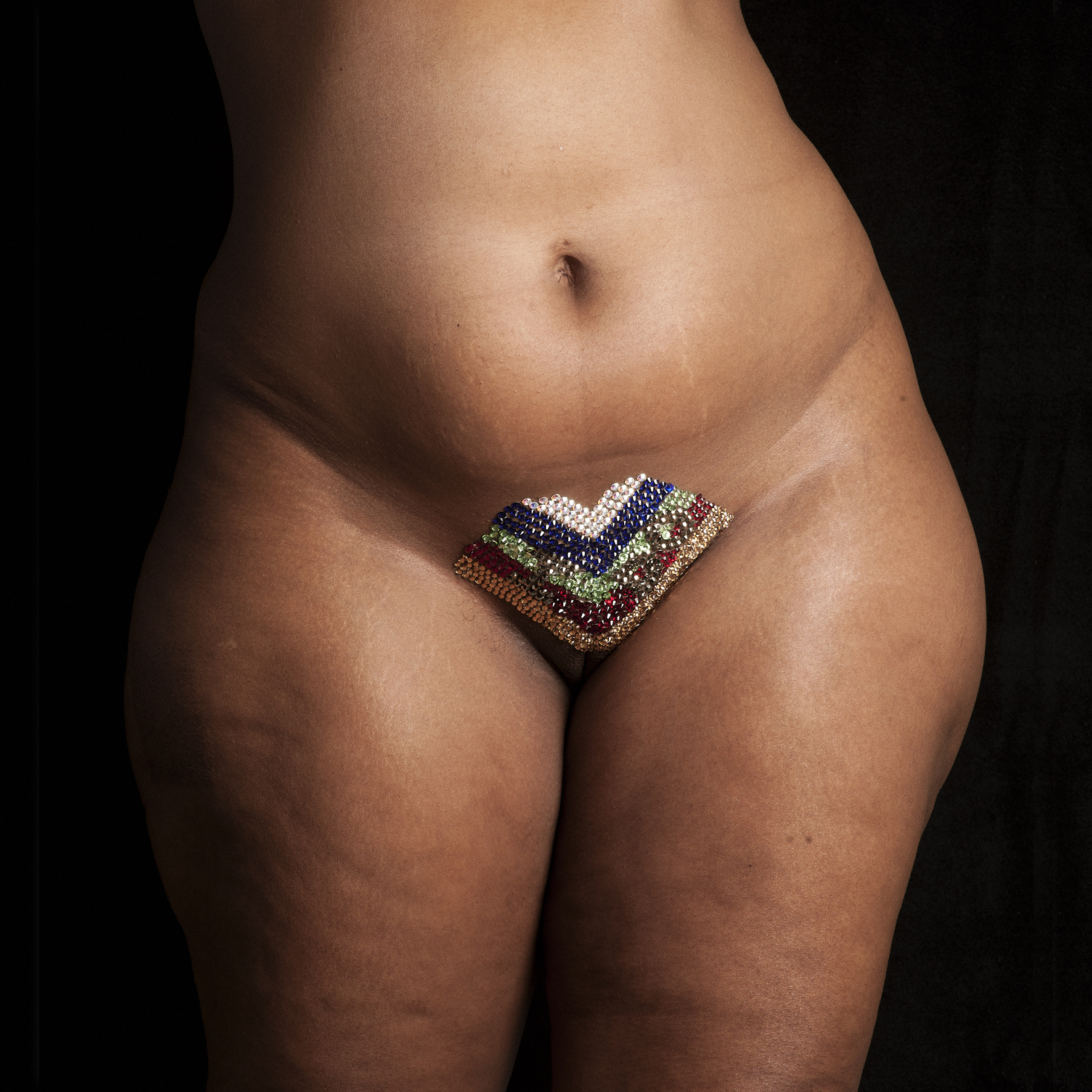 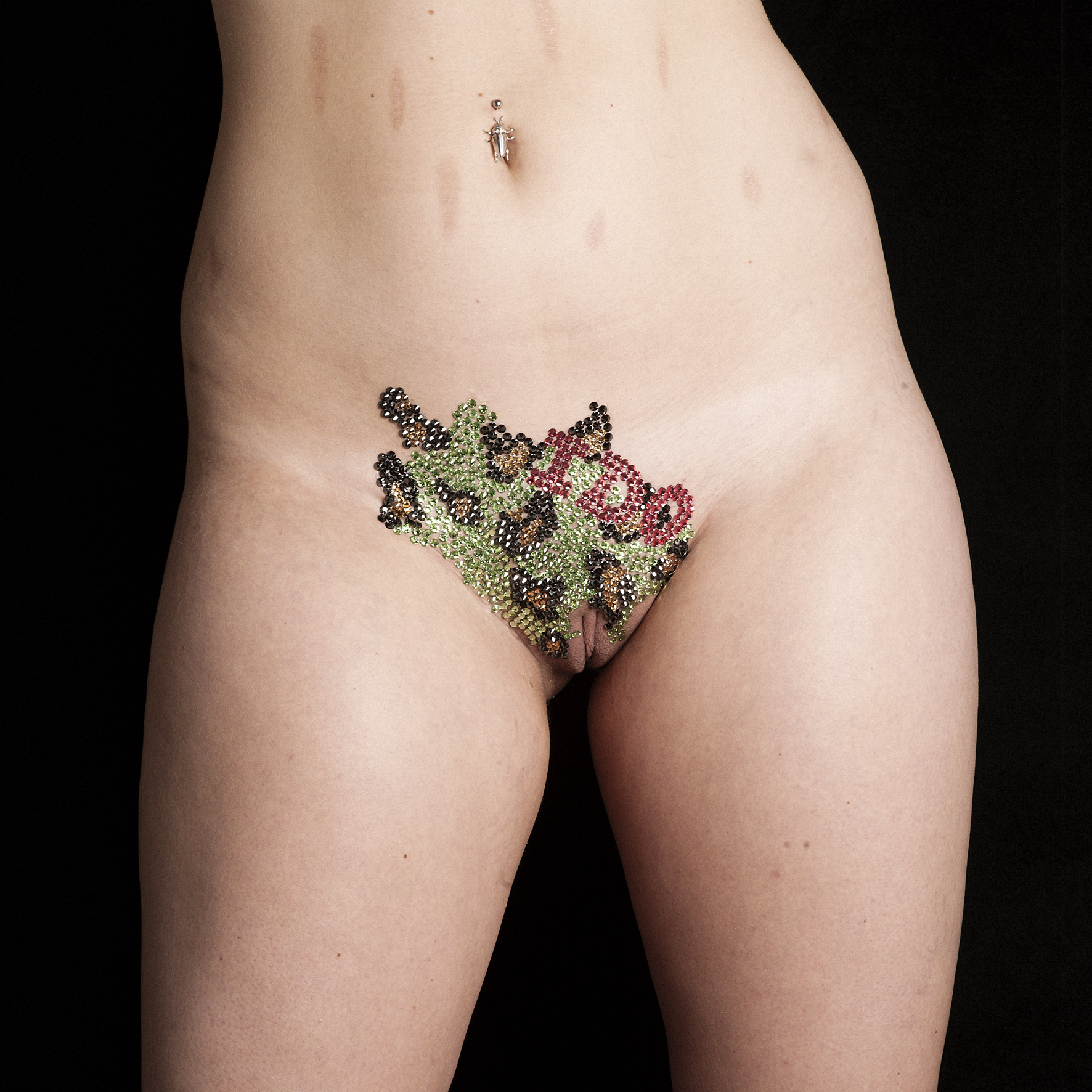 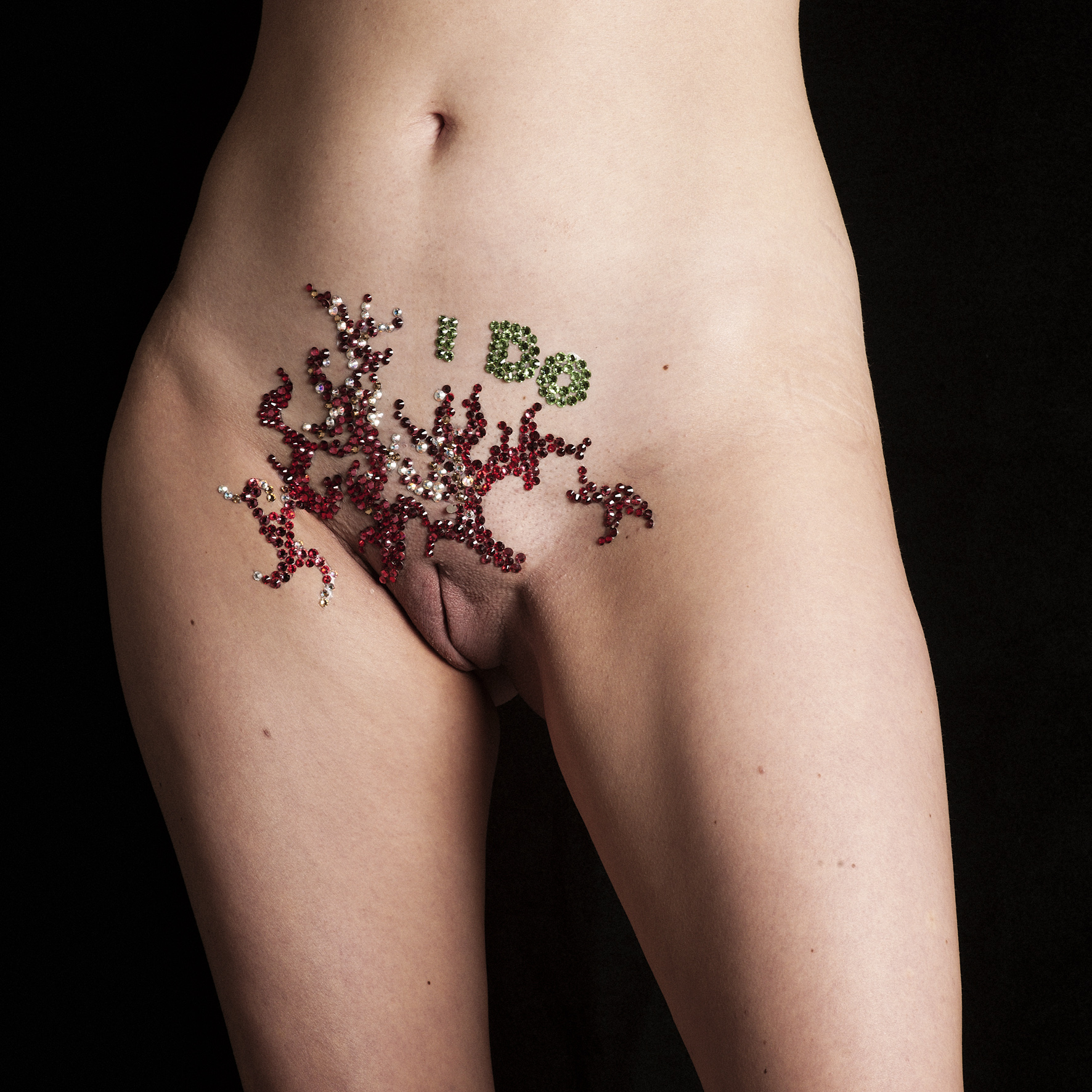 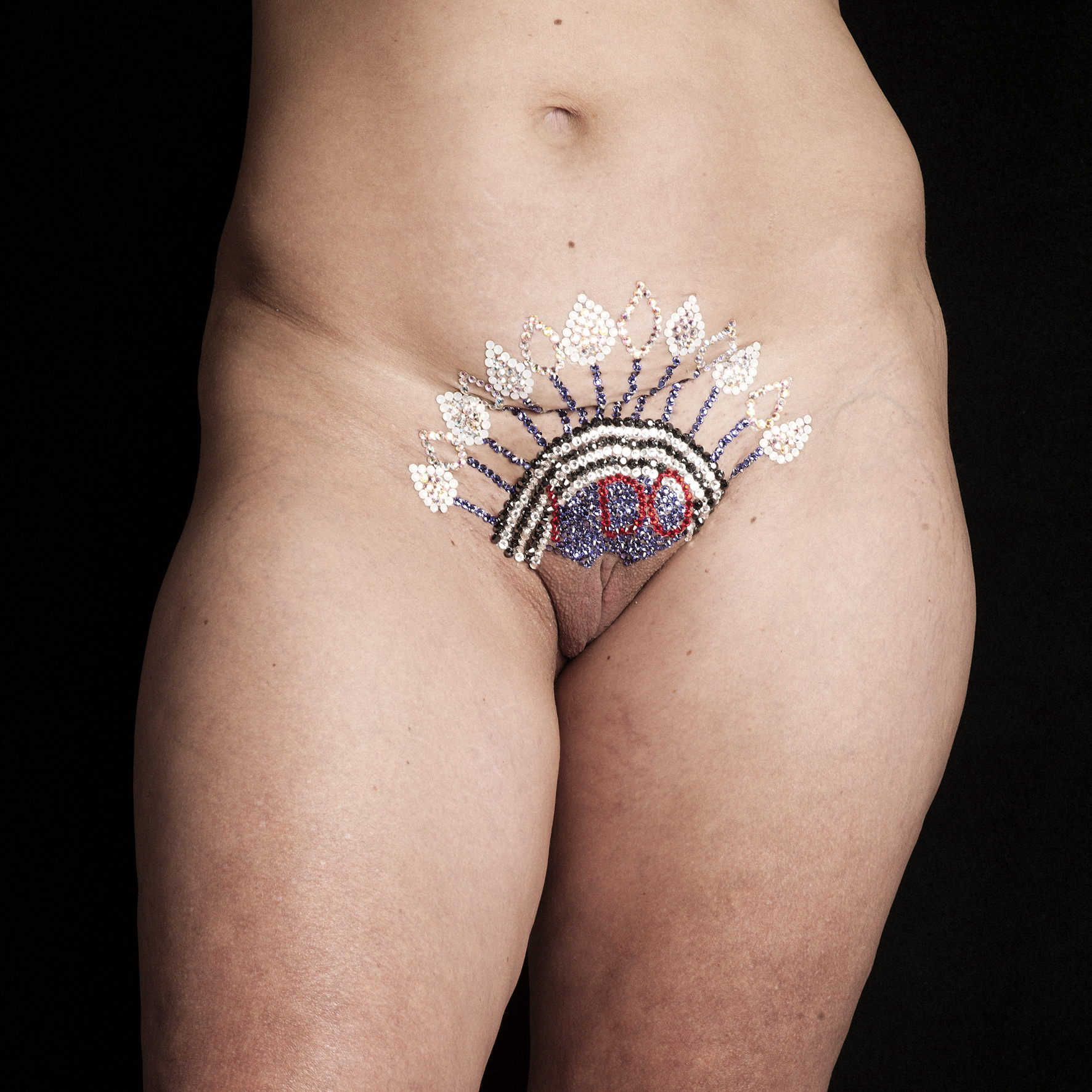 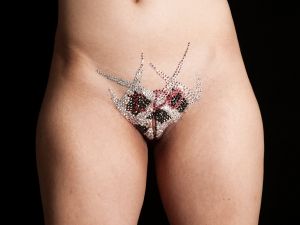 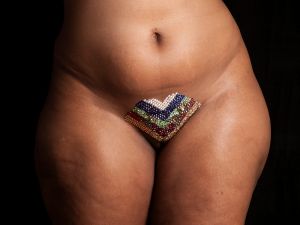 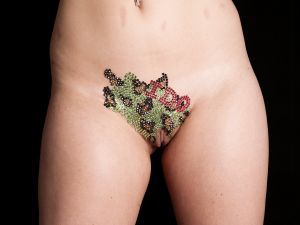 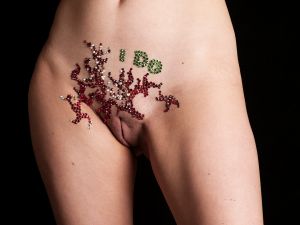 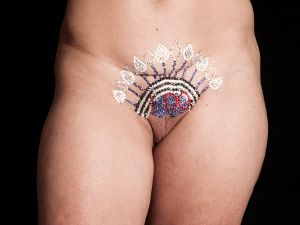 During her brief stay in New York, South African artist Frances Goodman put an ad in the Village Voice for female models, then adorned their pubic areas with rhinestones spelling out the phrase “I Do.” (This practice, for the uninformed, is known as “vajazzling.”) Then she photographed them. The product of her work, “The Vajazzling Series,” is revealed in her exhibition “Touched,” which opened last week at (Art) Amalgamated.

“A lot of the time we make decisions without knowing why we make decisions,” Ms. Goodman told Gallerist as she walked us through the gallery one sunny morning before the show’s opening. “We’re bombarded by the media and advertising, and are being sold a vision of ourselves. We don’t question where they come from.”

Ms. Goodman explained that while women shave their pubic region as an act of empowerment, most women don’t realize that the practice originates in pornography. As she spoke, we looked up at an image of one woman’s hairless crotch that was decorated with red jewels in the shape of a flame licking the edges of her thighs and belly.

“There’s a push-pull,” she said, “of like who are you doing it for.” Hence, the phrase “I Do,” which she chose because vajazzling is advertised as a treat for special occasions—like, for instance, saying yes to the one who proposed to you, apparently. Only one of the women photographed was engaged and these jewels fell off after about two hours as opposed to the usual two days.

“People get very uncomfortable about seeing the pubic area without hair when it’s photographed,” she said. “I keep getting told, ‘They’re not that easy on the eyes.’” Ms. Goodman laughed. She then walked us over to a refrigerator in another part of the gallery. “It’s supposed to be lit up,” she said, and had us move in closer whereby we heard the sound of a woman’s voice speaking pro-anorexia mantras. This is one of Ms. Goodman’s older works, which are in the show along with the hood of a muscle-car bejeweled with girly gems, a car seat festooned with lost earring and beautifully embroidered reproductions of toilet-stall graffiti.

While you may not be running out to the next vajazzling salon, take a look at some of Ms. Goodman’s work in the slide show above, and be dazzled.