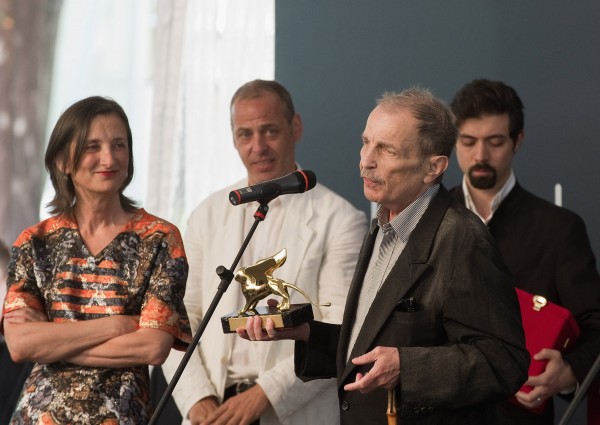 West with his Golden Lion at the 2011 Venice Biennale. (Courtesy Marco Secchi/Getty Images)

Franz West, the Austrian artist whose sculptures opened the medium to both bizarre and quotidian forms of participation and pushed it into the realm of design, becoming one of his era’s most influential artists, died in Vienna at the Vienna General Hospital. He was 65, and had been ill for some time.

Entering the art world in Vienna in the mid-1960s, Mr. West quickly moved from the dominant avant-garde mode of the time, performance-heavy Actionism, to a focus on sculpture that was playful and often nonsensical. It was open to play and hands-on manipulation, rather than standing apart as an object of contemplation.

>> A look at Franz West’s work, from Passstücke to Public Art


His Passstücke sculptures, or Adaptives, which debuted in the early 1970s, were modestly sized pieces of plaster, often with metal handles that people could hold and swing, their unusual shape and weight distribution causing their operators to move in odd ways. Their break from the violent seriousness of Viennese Actionism was dramatic. As Dan Fox put it in Frieze in 2001.”West’s work can be read as a kind of anti-Aktionism—quiet performance freed from the Sturm und Drang of your Mühls and Nitschs.”

Born in Vienna in 1947, Mr. West studied at the Academy of Fine Arts Vienna. After debuting the Adaptives, Mr. West expanded their freewheeling sensibilities into large scale works, using papier-mâché, metal and plaster to create bizarrely shaped, rough-hewn pieces on which viewers could sit or lounge.

New Yorkers have seen a handful of those works over the years, even though Mr. West had only one American retrospective, as Tyler Green noted today (it was organized by the Baltimore Museum of Art and traveled to the Los Angeles County Museum of Art). The Public Art Fund presented a winning installation of his large work The Ego and the Id at the southeast corner of Central Park in 2009 (which, full disclosure, was on loan from Observer contributor Adam Lindemann and Amalia Dayan), and a suite of sculptures in 2004 at Lincoln Center.

He was the master of elegant but robust blobs and spindly, snakelike swirls, which he frequently painted in pastel yellows, greens, blue and pinks, particularly in the case of his public works. Though his work sometimes vaguely suggested bodily shapes (or even libidinal forces), it was for the most part rigorously abstract.

When working on a smaller scale, his paint jobs were often patchier and more psychedelic, exercising, as Times critic Ken Johnson has noted, a massive influence on sculptor Rachel Harrison. One can also see his sensibility in the Charles Long’s slicker, though no less adventurous, sculptures and even Dan Colen’s faux-graffitied rocks.

Beyond his deliriously inventive sculptures, Mr. West also developed a lively and successful practice as a furniture designer, making brightly colored chairs that were a great dealer more streamlined in comparison to his sculptures. They have become mainstays of many contemporary art collections and paved the way for many artists (Urs Fischer, most recently) to embrace design. He believed that furniture was central to his work. “The Adaptives would be the dream and the chairs and tables would be the Earth,” he said once, explaining the relationship between those series.

Mr. West was perhaps the most celebrated Austrian artist of the postwar era, participating in just about every major international survey. He appeared in two Documentas, in 1992 and 1997, and numerous Venice Biennales, taking home that exhibition’s highest prize, the Golden Lion, in 2011. His other awards include the 1998 Wolfgang Hahn Prize of the Museum Ludwig in Cologne, Germany, and Vienna’s Otto Mauer Prize. In 2008 he was the honoree at SculptureCenter’s annual gala.

The artist was represented by Gagosian Gallery, Galerie Meyer Kainer and Galerie Eva Presenhuber, which together released a statement in conjunction with his nonprofit organization, the Franz West Foundation, that read in part, “Despite his international fame, his humour, generosity and quiet energy never left him.”