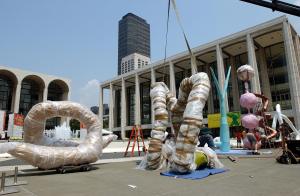 The next time you have 10 minutes to spare, read this 2007 conversation between Tom Eccles, the former director of the Public Art Fund, and the late Franz West, who died today at the age of 65. It’s a beauty.

West discusses growing up in Austria immediately after World War II, his dentist mother (“There was always a lot of screaming and blood”) and various series he’s produced over the years.

He also talks wonderfully about his 2004 sculpture show at Lincoln Center, organized by the Public Art Fund, and addresses the fact that some of his works look like bodily waste. Here’s that section, in full, below.

Tom Eccles: When we worked together on the exhibition at Lincoln Center in 2004, you suggested lining the sculptures up together at the front of the plaza. It was quite a radical move.

FW: A commentary? No. But then again, perhaps it’s unconscious on my part. Everybody likes shit anyway. As a child, shit is the first gift that you give to your parents.

Read the full interview, titled “Waking Up to Zombies,” here.