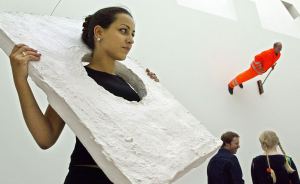 A museum visitor models an Adaptive by West at the Museum for Modern Art in Frankfurt, Germany. (Thomas Lohnes/AFP/Getty Images)

The more you read interviews with the late Franz West, the more there is to love about him. Today we have this excerpt from an interview conducted by MoMA photographer curator Roxana Marcoci on the occasion of the museum’s “Comic Abstraction” exhibition in 2007. Ms. Marcoci asks about the theatrical element of his Adaptives, plaster sculptures that people could pick up and manipulate, and that sets him off on a pretty interesting tangent. Here’s West:

…Whereas the word ‘ritual’ always refers to something religious or mystical, I thought along more emancipative lines. I took seriously slogans like Joseph Beuys’s famous comment that “every human being is an artist.”

For instance, I once saw this gestural marking on canvas by Cy Twombly in a museum. It had some circular forms. At that time, I was involved with Wittgenstein, who reckoned that music could be described through gestures. I had the idea to interpret Twombly’s work into a quasi-concrete object by making a circular form. They experience of the work would not be internalized. Rather, it would be an unchoreographed dance without music, like a pantomime or Chinese shadowboxing.

Read the whole interview here. (You’ll need to click the photograph of Lisa de Cohen holding one of his Adaptives to find the piece.)