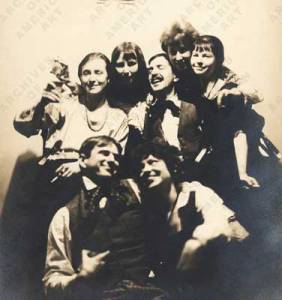 When Frida Kahlo pressed her lips, painted hot pink, against a letter she penned in bright blue ink, and then sent the lip-smacked love note to her paramour, the photographer Nickolas Muray, in 1939, little did she know that her note would make it into an exhibition over 70 years later inspired by a little-known American illustrator named Peggy Bacon. But such is the case with all of the artists and artworks in “The Six Degrees of Peggy Bacon,” an exhibition at the Smithsonian Institution inspired by the game “Six Degrees of Kevin Bacon” that suggests the art world is just as much a hot bed of incestuous interconnectedness as Hollywood ever was.

The Washington Post provides a sample look at this twist on the now-classic Kevin Bacon game with an art-historical romp through artist’s photos, personal letters, sketchbooks and other ephemera, as seen at the exhibition at the Lawrence A. Fleischman Gallery, that link up a variety of artists including Kahlo and Diego Rivera. The distance from Kahlo’s lips to Peggy Bacon, you wonder? Five degrees.