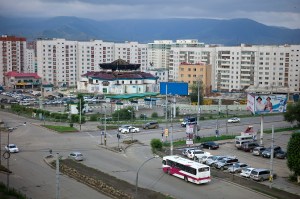 In The New York Times, Dan Levin offers a nice look at contemporary Mongolia, which is now home to the fastest-growing economy in the world, thanks in large part to “China’s insatiable demand for natural resources.”

Naturally, with the country’s growing wealth, some believe that an art-market boom can’t be too far away. Meet Gantuya Badamgarav, who taught herself English using a Russian-English dictionary, and was once one of the best-compensated executives in the nation.

[Ms. Badamgarav] gave it up on the expectation that she could do even better seeking a piece of the new wealth flowing through town. In April, Ms. Badamgarav opened the 976 art gallery in a new mall, filling it with abstract oil paintings and metal sculptures. Wearing skinny jeans and biker boots, Ms. Badamgarav said she expected Mongolia’s mining boom to fuel a Chinese-style cultural renaissance, and she plans to be ahead of the curve.

“In China, once they had luxury cars and Louis Vuitton bags, art came next,” she said.

As Bloomberg reported, Louis Vuitton recently opened up shop in the nation’s capital, Ulan Bator, on the logic that it can do business in any country with three billionaires.

What remains to be seen is whether Mongolia ends up more like its northern neighbor, Russia (where a number of prominent dealers recently closed), or its southern neighbor, China, where the market still appears to be relatively robust.